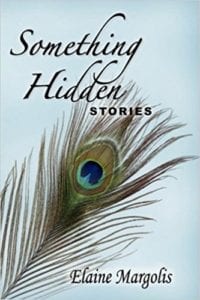 Life, with its daily pleasures, painful discoveries, and deep regrets are the themes that occupy the pages of Elaine Margolis’ newest work of short stories, Something Hidden.

The stories in Something Hidden are quite varied, ranging from construction workers attempting to raise a large steel beam upon a supporting frame (Intangibles), to a young boy’s first crush (Ynez at the Roller Dome Disco), to a woman intrigued by a portrait of a long-dead teen (The Exchange), to a child’s desire to learn the identity of her father (The Crystal Café). These are tales about every day living, simple mysteries, and hidden desires; there are no grandiose adventures within the pages of Something Hidden. That simple premise is in large part the charm of this collection: these stories are about the person living next door, the friend who recently lost her spouse, and other easily recognizable characters.

In A Biker’s Requiem, Margolis explores the pain parents feel when their adult child unexpectedly dies. How will they handle a group of bikers, the very people they tried to keep from their son, when they appear at the son’s funeral? Perhaps the parents blame the bikers for showing their son their free-wielding lifestyle. Will they be polite? Ask them to leave? What about all the glaring eyes of neighbors and friends who disapprove of the bikers? The reader can feel the discomfort the parents are hesitant to express, the sort of uneasiness that makes a person squirm in their seat. The Exchange deals with an alluring painting of a teenage girl who lived in Belgium several centuries ago and the present day woman, Elise Crawford, who is quite taken by the portrait. So enthralled with the girl’s searching expression is Elise that she is unable to think of anything else. When the painting’s owner must suddenly move away, Elise finds herself the new caretaker. What happens next is downright eerie yet fascinating.

The story that captures the title of the book, Something Hidden, deals with a woman who has travelled to Paris to work on her art. On Bastille Day she sees a mime performance that frightens her. Rushing back to her apartment, instead of forgetting about the mime, she finds herself drawing his portrait. Soon she meets Henri, a friendly shopkeeper who makes and sells marionettes. Henri explains, “Things we see might bring out hidden fears, even hidden selves of which we are not aware.” Conversation ensues and hidden fears are soon exposed.

Many of the works in Something Hidden are told in the first person and the author successfully changes voices from that of a confused teen, to a middle aged businessman falling in love, and a lonely widower. The writing is descriptive and grabs the reader within the first few paragraphs of each story, a difficult, but necessary feat in the genre of short stories. In Vibes, a tale of a forlorn wife who befriends a couple in a bar, the wife’s desire to keep the new friends to herself is expressed beautifully as she notes, “…building a magical wall around her and me and Roger, leaving things like husbands out.. Everything inside that magical wall was soft and friendly like her voice. A magical wall I never wanted to be on the other side of.” Although a few of the stories end a bit too abruptly, overall the works contained in Something Hidden will captivate and satisfy.

Quill says: Something Hidden deserves to be enjoyed and savored, like the company of a good, but mysterious, friend.