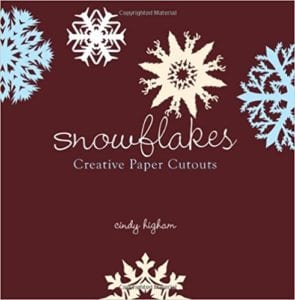 If you’ve ever seen a window full of gorgeous paper snowflakes there is no doubt the WOW factor set in (along with a bit of envy) when you first laid eyes on them. If you never thought you possessed the artistic ability to create these magical cutouts, you might rethink that when you read the instructions and take a look at the layout in Snowflakes: Creative Paper Cutouts. Some of the patterns in this book are relatively simple to create, while others are more intricate and difficult to cut. There are snowflakes for all skill levels in this book. Cindy Higham recommends flipping through the book and taking a “look at each pattern (not the entire snowflake) in order to determine how easy or difficult the snowflake will be to create.”

For example, a gorgeous snowflake named the “Spiderweb” looks intricate, however a quick glance at the pattern would suggest that most people would be capable of creating this gorgeous snowflake. On the other hand, when I looked at the pattern for one named the “Cactus Grove,” I realized that I’d have my work cut out for me. The instructions in the front of the book are quite clear and relatively simple. Access to a photocopier is a help, but not necessary as the patterns can be traced. The patterns have been adapted to 8 ½ x 11-inch paper, a size that most people have on hand in the form of copy paper. There is no specific recommendation for scissors, however when I experimented I found that craft scissors were easier for me to manage and on a few of the designs such as the “Menorah” my small curved-blade ones made the job easier.

There are a full seventy-five different designs in this book, more than enough to satisfy anyone’s taste. Included are a few suggestions for decorating them and several suggested uses such as “snowflake patterns as quilt blocks, stencils, crochet patterns, wood ornaments, or patterns for stained glass!” Personally, I love to see this type of decoration on walls and windows as I live in Snowflake Bentley territory. The author does note that a bit of experimentation or even a slightly different cut on one pattern can make a unique snowflake. One other suggestion that I would like to make is that the folding instructions are clearly described and illustrated, but anyone who attempts to fold the paper needs to read and look very closely at both. I missed something in the translation and let’s say I was rather disappointed that my first snowflake came out in two pieces. After I got the knack of it, I ended up with some gorgeous flakes!

Quill says: If you’d like to decorate your house with “a blizzard full of snowflakes,” the marvelously unique patterns in this book will make your house look like a winter wonderland!