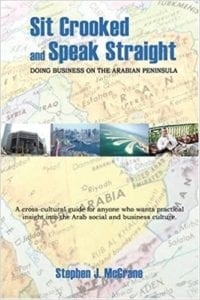 In light of the current energy situation and our dependence on foreign oil, Stephen McGrane's book, Sit Crooked and Speak Straight, is a timely treatise that explains the tools needed to conduct business with members of the Arab culture. Whereas in the U.S. there are certain organizational norms regarding meetings, for example, promptness in starting, advance preparation by participants, adherence to an agenda, and aiming for settlements at the end of the meeting, Arabs are less likely to follow this linear pattern, preferring a more circuitous route.

The author graciously and respectfully covers the differences in cultures in a direct manner that will help set at ease any businessman or woman (to the extent that women are often excluded from meetings) in working with Arabs. The book details the do's and don'ts of business dealings in an easy-to-read format that is informative as well as engaging. We learn that Arabs may be late to meetings, or not appear at all; that family takes priority in Arab culture and one should not be surprised by interruptions by family members at any time; that hierarchy is strictly adhered to, and that the man at the table who is doing the talking is probably not the one making the decisions -- it is usually the "silent observer" sitting next to him. This is not to say that Arabs don't abide by stringent rules, but they are substantially different from American ones.

McGrane deftly gives an abbreviated overview of the Muslim faith that all businessmen need be aware of before traveling to Arab countries. He explains why Ramadan is not a wise time of the year to strike a business deal, and reminds the reader that Muslim's are required to pray five times daily, thus disrupting business schedules. Sometimes the Arab culture comes to clash with the American norms, as reflected in the rules regarding women. While a woman may conduct a business meeting (although she must be dressed conservatively), it is probably best to send a man as a representative, as Arab women do not participate in the business world. By exploring these unwritten codes, McGrane helps the reader avoid the pitfalls of doing business in this part of the world. He stresses that patience and a good sense of humor are one's most valuable tools.

What to look for in an Arab business liaison, the importance of a good interpreter, and what forms you will need before your travels are just some of the topics included in this book. Sit Crooked and Speak Straight is chocked full of practical suggestions. An example of one intriguing recommendation he offers is that all graphics flow from right to left, mirroring the Arab language. These hints are invaluable for business presentations. The appendix offers listings of typical business hours, Arab proverbs (highly amusing and educational), and several phrases you will need to know in order to greet and conduct business with your host. McGrane emphasizes that once you understand Arab culture, the rewards will be bountiful: you will acquire valuable friendships, and grow as a person. This engaging narrative of business etiquette is a rich resource for any person who is looking to gain an understanding of the Arab culture.

Quill says: An excellent and highly informative book for anyone traveling to the Middle East.