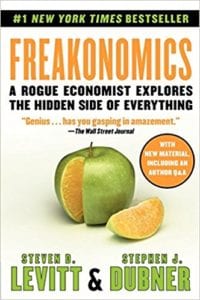 Ever wonder if sumo wrestling is rigged? Or maybe pondered the likelihood that the slim wealthy single you met on a dating site is overweight and unemployed? In Freakonomics, Steven Levitt and Stephen Dubner take on these questions and more in their fascinating and hilariously funny exploration of the most bizarre phenomena our world has to offer. Using solid research and piercing wit, Levitt and Dubner delve into the inner economic workings of those enterprises that are ignored by stock traders and analysts, and tackle the social issues that are too touchy, or just too weird, to be covered by more traditional writers.

Using the theories of economics, Levitt and Dubner challenge so-called "experts" or talking heads by asking intriguing questions. For instance, in the chapter titled, "Where Have All the Criminals Gone?" various experts are quoted claiming that the reduction of crime in the 1990's was due to several factors: a larger police presence on the streets, an aging population, and/or longer prison sentences. Levin and Dubner dispute these theories and set out to show us that Roe vs. Wade, the legalization of abortion, affected the crime rate more than any other factor. Levitt and Dubner offer the reader compelling statistics to demonstrate that a reduction in unwanted children directly influenced the reduction in crime. In another chapter Levitt and Dubner draw correlations between sumo wrestlers and teachers, showing that they both resort to cheating under pressure, while in yet another chapter we learn why street gang members could run McDonald’s.

Some readers may argue with Levitt and Dubner’s conclusions, and question the difference between correlation and causation; despite those objections, this is a worthwhile read that encourages the reader to question foregone conclusions. Levitt and Dubner also have a weekly column in the New York Times.

Quill says: Freakonomics will change your view of economics, and the role it plays in everyday life.