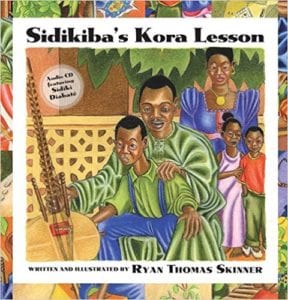 Sidikiba’s father was one of “Mali’s greatest kora players” and as a ten-year-old there would be nothing better than learning how to play himself. Sidikiba, his brother Balle, his sister Jelika, his mother, father and extended family all lived in a house on the outskirts of Bamako. He shared his room with his brother and sister. He was intent on improving his French and studied hard, but one day the clatter in the commotion in the courtyard made it difficult for him to concentrate so he went outside to see what was going on. A few of his father’s friends, all dressed in colorful boubous, had arrived to convince his father to play for them. The smiling faces weren’t very difficult to turn down!

He tuned his instrument and then began to play. Very soon a melody began to flow from the strings and the women began to sing the song Kayira as “his fingers danced gracefully over the kora’s twenty-one strings.” Sidikiba was astonished at what he heard. Later when he was putting his father’s instrument back in the case, he found a smaller kora. What could this be? His father told him that his uncle Jeli Mady, also a skilled player, made it for him as it was his time to learn. Jeli told Sidikiba that “The kora is like a human being. You must learn to treat it with respect.” Sidikiba was almost overwhelmed by the playing around him, but even though he practiced hard he felt embarrassed and shamed he couldn’t play fluidly like his grandfather and the others. Jeli took him to the market to buy “one pure white hen, and a young male goat with a light brown face.” They would then go to the marabout or “traditional soothsayer” to discover Sidikiba’s future. Would he ever be able to play the kora like the seventy generations had before him?

I loved this book and read it three or four times. Interspersed throughout the book you can read vignettes about each track on the included CD. The stunning music is played by Sidiki Diabaté. The music can be played at intervals throughout the book or can be played as background music during the reading. This book and its artwork are a wonderful way to learn about another culture and its rich and soulful music. In the front of the book there is some interesting background material on the kora and a description on how it is made. In the back of the book is a glossary and the seven track CD.

Quill says: This book is definitely a sleeper you won’t want to pass up!