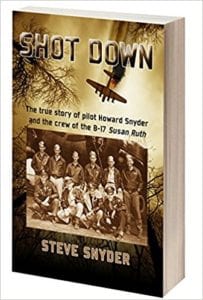 Steve Snyder brings his dad, Howard Snyder and his exceptional flight crew of the WWII B-17 Susan Ruth, back to vibrant life across the pages of his memoir: Shot Down.

Sometime around February 8, 1944, Howard Snyder and the crew of the Susan Ruth were forced to abandon ship. The Susan Ruth was struck by enemy fire and the cockpit was filling with smoke (and fire) at a rapid rate. Howard Snyder was the pilot and the mission began as each mission began. The crew assumed their positions in the tight quarters of their aircraft. They donned the air and eased into fighter formation. Sadly, on this day, their fate perhaps was pre-destined, but none of the men could have known what lay ahead in the days and months to come once their craft began its rapid descent from the comfort of clouds and sky.

The campaign of war and the formidable Nazi Regime led by the tyrannical monster, Hitler, was far from being over the day the Susan Ruth went down. Rather, the heat was being turned up more than a notch and proud American soldiers had one vision they focused on: stop the madness of Hitler. Howard Snyder had a young wife and two beautiful baby girls state-side. Yet, as his ship spiraled downward, all he could wonder was whether he and his crew would make it out alive. Would they be captured? Would they perish? Would they survive if captured? Beyond the crash, the days and months ahead would live in infamy in Snyder’s memories years beyond the end of war. Although his son Steve had yet to be conceived, it would be his commitment and the love of his father and family that would compel him to set pen to paper decades later and begin his personal journey of telling the world yet another story of the brave crew of the Susan Ruth.

I finished reading Shot Down a little over a week ago, but wanted to savor this magnificent story before immediately running to my computer to write my critique. From the onset of this amazing story, I felt an instant connection with this author. He is proud. He is bursting with love. He is patient and he is on a mission to tell his father’s story not only with heart, but with precise accuracy. I was not aware of the tyranny and day-to-day trauma our brave men of this era faced. My dad was a WWII Veteran (82nd Airborne). I often recall how close-mouthed he was when it came to sharing his experience. It was simply something he had no desire to speak of. I applaud Mr. Snyder for his conviction in getting the thoughts down on paper—thoughts created by hours, months and years of sifting through the journals his father kept as much as sourcing historical accounts to get it right. The honor and pride this author has for his father is audible page after page and he pays beautiful homage to the ghosts left in the wake of such an egregious war. While I did not fact check every historical reference, I commend Mr. Snyder for his exceptional bibliography and index at the back of the book. It further enhances his commitment to telling the story and his rounded ability as an historical writer. The love this man has for his father and men (and women) in service is palpable and I thank him for his service in sharing such a beautifully written memoir. Well done Mr. Snyder.

Quill says: Shot Down is a compelling memoir that further affirms why we must ‘never forget.’

For more information on Shot Down, please visit the author's website at: SteveSnyderAuthor.com