Shogun Of The Heavens: The Fall Of Immortals, Book One 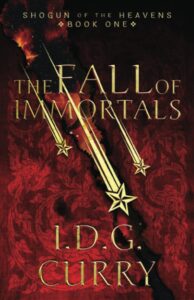 Shogun Of The Heavens: The Fall Of Immortals, Book One

From rising new fiction novelist I.D.G. Curry comes his first work of fantasy entitled Shogun Of The Heavens: The Fall Of Immortals, Book One. In this story, Curry has created a magnificent fictional world of the gods, set in the depths of the heavens, complete with war and mythological monsters.

Curry’s novel begins as an ominous phenomenon is identified that appears to be approaching the supercontinent that the gods call home. This strange sensation is enough to cause anxiety and tension among the gods, subsequently resulting in many clashes and battles. The fights that follow ultimately determine who are friends and who are foes. Friendships and relationships are put to the ultimate test, and many do not outlive the battles.

Throughout the story, there are many subplots involving various groups of gods. These subplots all flow seamlessly together to create one overall, well-integrated theme representing tension, war and conflict. While all the subplots are awe-inspiring, there is one exceptionally appalling story of deception involving Zeus, Zagreus, and Tithorea while Hera surreptitiously watches the entire encounter.

Curry’s writing is fast-paced, thrilling, and easily keeps the reader entertained throughout the story. There is truly something for everyone in this tale: war and battles, seduction and sensuality, torment and sorrow, and familial conflicts. Readers who prefer more of an action-packed story will appreciate the war and battles that the gods and monsters consistently find themselves fighting throughout the story. Conversely, readers who favor simple stories of familial or romantic love will welcome the intimate relationships that exist between the gods.

As a reader who was not familiar with the world of Greco-Roman gods, I greatly appreciated that Curry included a glossary in the back of the book. This glossary was comprised of important locations, definitions, significant objects, the rules that govern the lives of the gods, and notable gods and groups. This was extremely helpful given the sheer magnitude of details in the story, and I found myself referencing the glossary many times throughout the book.

Quill says: Curry has created what will undoubtedly become a new favorite series for fantasy genre fans with his first installment Shogun Of The Heavens: The Fall Of Immortals, Book One. This dynamic, exciting story of fantasy draws readers in and keeps a strong hold of them until the last page has been turned.

For more information on Shogun Of The Heavens: The Fall Of Immortals, Book One, please visit the website: shogunoftheheavens.com