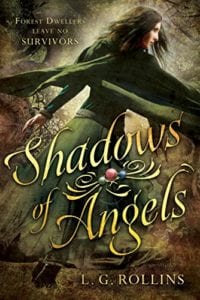 It is a known fact that anyone caught by the brutal Forest Dwellers that lurk behind the trees and brush will never see another day. This is a truth young Aerbrin is well aware of as she has grown up in the woods with her father knowing the dangers that constantly exist in the forest. Her own mother was killed by the horrible Forest Dwellers and now those vial creatures are banging on their door looking to finish the job and kill Aerbrin and her father. As the banging increases its intensity and the door begins to give, Aerbrin’s father knows he does not have much time before the door will break down completely.

Fear grips Aerbrin as each shove against the door vibrates the floorboards of their home, and she can’t help but think there is no way they will survive this, for they are simply outnumbered. With these terrible thoughts filling her head, Aerbrin’s father pulls her aside and sets a small stone in her hand and blesses her with it. He says this is a sacred and powerful Zaad Stone that was given to her mother and it was her wish that eventually it be given to Aerbrin. He then added that it was imperative that she always keep it with her and never let anyone have it, for a Zaad Stone can only be given to someone, no one can physically take it away and keep its power.

Suddenly the front door comes crashing down and a string of Forest Dwellers pour into the house. In the midst of the fighting Aerbrin is knocked unconscious and the world goes black. When her eyes finally open she is first surprised to find that she is alive, as Forest Dwellers do not leave survivors when they attack. Then she immediately thinks of her father but comes to find that he died in the fighting. Even though she is overcome with grief Aerbrin knows that she cannot stay in the woods by herself, so she decides the best place to go is a city called Cuneus where an uncle, aunt and cousin of hers lives. Perhaps she can find an answer of why she was left alive while her parents were targeted to be killed. However, Aerbrin finds that she holds more power than she can imagine all in that small Zaad Stone she carries in her pocket.

There was not a lack of adventure and action from the very first page of this book and I was instantly drawn in. Author L.G. Rollins did a wonderful job of moving the story from one exciting scene to the next and that had me turning pages as quickly as I could read them. I hope to get my hands on the next installment of this series as the end of this one left on such a cliff hanger that I wanted to briskly start reading about the next adventure coming up.

Quill says: A wonderful fantasy and adventure novel that has suspense on every page.