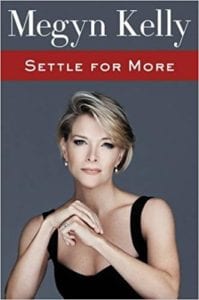 A successful lawyer on the way to being offered partner at her law firm and a top-notch journalist with one of the most widely watched programs on cable news - Megyn Kelly has enjoyed both careers. Throw in a loving husband and three great kids and you've got the makings of a wonderful life. In Settle for More, Kelly recounts her life and how she went from being a middle-class kid growing up in upstate New York to having one of the most recognized names in journalism.

Settle for More opens with Kelly recounting the first Republican debate of the 2016 election season in August of 2015. She gives the reader a few pages of behind-the-scenes events and then tells of getting violently ill earlier in the day. Somehow, with the help of her doctor and shear determination; she pulled through and was well enough to participate in the debate. Her first question, about Donald Trump's treatment of women, would not just make headlines the next morning, but catch the ire of the future President. That exchange would propel Kelly into the spotlight in a way she didn't desire. It would require she get round-the-clock security, deal with hateful email and texts, as well as fear for her children's safety. How did she get to this point?

To understand where Megyn Kelly is in her life now, she takes the reader back to her childhood. She grew up with two loving parents, parents who did not accept excuses, and as Ms. Kelly likes to recall, "rejected the trophies for everyone mentality." Her early life was fairly normal, a typical middle class family. That was until her father died unexpectedly when she was in high school. Her father's death would have a profound impact on her life, and she discusses it openly with the reader.

After high school, Kelly went on to law school, and then found a job with a Chicago law firm. She moved up through the ranks, and was well on her way to making partner when she realized her law career was not fulfilling. Having always wanted to be a journalist, she took a big risk and pursued a new career path. It wasn't long before she had a job at a local news show and from there her career really took off. The second half of the book discusses Kelly's rise at Fox News as well as the events surrounding the 2016 election season.

Author Megyn Kelly writes an interesting memoir with her first book, Settle for More. She frequently shares her fears, joys, and difficult decisions during various points in her life, how she learned the difficult lessons that her parents worked hard to teach her, and how never settling for less than she felt she was due helped propel her forward. The best parts of the book are near the end, where she talks about her current job at Fox News as well as her fight with Donald Trump. Readers will learn what was going on behind closed doors that viewers were never privy to. For those who enjoy watching Megyn Kelly on television, this will be an entertaining read. If you've never watched her show (and she's just announced that she is moving to NBC to pursue new challenges), the book will make an interesting read as it shows how somebody with little managed to make it to the very top of her chosen field.

Quill says: Settle for More is an enjoyable read about a woman who excelled in two different careers.