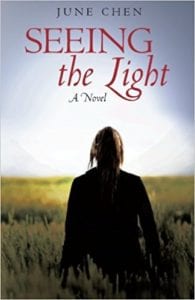 Seeing the Light is the story of Rhea Kosmo, a selfish teenager, who has a spiritual explosion, as she calls it. At this point she becomes an adult who does volunteer work and begins to study The Bible. I found Rhea's selfish behavior to be within the normal range for a teenager. She admits to having a crush on her friend's boyfriend, for example. She fails to give a gift to a friend, and she once tells her brother's friends that they should pay for all the food they are eating at her house.

Rhea's less-than-charitable moments are balanced by her strengths. She feels love and responsibility for her family members, gets good grades, loves her pets and takes good care of them, and is loyal to her new best friend. Rhea later gets married; she has a healthy relationship with a nice man who respects and admires her.

Rhea, however, decides that she has been selfish all her life and is ready to make a transformation. She is choosing values similar to those of the rest of her family and makes the transition easily. Rhea's choice to follow a Christian path after the example of her parents and brother seems a sensible choice, as the farm and her family are an island of calm, love, and happiness in a crazy world.

Though Rhea's transformation to adulthood did not strike me as dramatic, there was plenty of other drama along the way. In the third chapter Rhea and her new best friend, Karen stumble upon two farm hands having sex with sheep. This is the first in a whirlwind of surprising events in Rheas life, many of them difficult, and some just bizarre. Her brother's girlfriend turns out to be a drug addict. Her brother announces to the family that he is gay. Then her brother's partner is forced to move in after his home and workplace burn down. While staying at the farm, he shares with the family that he was attacked by a pedophile as a child. Next Rhea's best friend is nearly raped; Rhea is accosted by a flasher while jogging, and her father reveals that he was an alcoholic in his younger days. All this and a lot more happens in 145 pages.

In short almost every chapter of Seeing the Light contains a truly surprising turn. Rhea is a stable character in the midst of much turmoil. She also has a loving family who support her throughout the book, even when they are disappointed by her actions. The Kosmo family, charitable Christians living on a farm with lots of beloved pets, are safe from the drugs, violence, and chaos that surround them. Not only do the family members support Rhea, but they support her brother who announces that he is gay, the brother who wants to fight in Iraq, and the brother who wants to go to private school so that he can eventually become a priest.

Rhea enters adulthood in a dangerous and sometimes shocking world. Though she suffers a great sadness, the reader knows that Rhea will be all right in the end. She has the support of a loving family and has found purpose in helping others.