Seducing the Defendant (The Conflict of Interest Series Book 2) 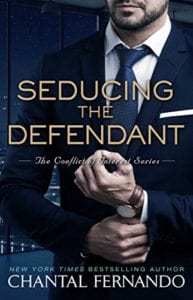 Seducing the Defendant (The Conflict of Interest Series Book 2)

Jaxon Bentley may seem like your typical high class lawyer, but in reality there is more than meets the eye. Jaxon works and partly owns one of the best law firms in the city. Although he seems tough on the outside, he does have demons of his own. Jaxon was taking a break after the death of his sister Olivia, when he receives a phone call about a case that will change his life forever.

Scarlett Reyes is charged with the murder of her husband, Officer Darren Melvin. Darren went missing two years prior, around the same time that Scarlett left the country to take care of her sick aunt. Since his body was never found, no one was ever charged with anything. Two years later, Darren’s body is found in the river with a gunshot wound to the head. With Darren being one of their own, the police will do anything to solve the case. Upon searching their home, the police find the same kind of gun that killed Darren in their house. After finding Darren, Scarlett is asked to return home from Paris. She is then charged with the murder of her husband. Scarlett, claiming her innocence, seeks Jaxon to take her case. While Tristan, Jaxon’s business partner, works on getting Scarlett out on bail, Jaxon begins looking over her case.

When Jaxon initially meets Scarlett, their meeting does not go very well. Scarlett is very standoffish and does not provide Jaxon with much information. Although Jaxon agrees to take her case, and promises to do everything he can to keep her out of prison, he feels that there is something that she is not telling him.

Jaxon and his team begin working on Scarlett’s case immediately. While they are looking into phone records and credit card statements to find anything that can help, they see a name that continues to turn up - Valentina Sullivan. Jaxon’s team continues digging and to find out as much information about Sullivan in order to see if Darren was living a double life. Ultimately they find that not only was Darren living a double life, but that he was doing so with the money and property that Scarlett’s father left her.

Jaxon and his team continue investigating and throughout this process Jaxon finds some unexpected information. With enough evidence, Jaxon goes to court with what he has. Although the case is solved, the outcome is a little unexpected.

After Darren’s case is solved, Scarlett and Jaxon start seeing each other more. Scarlett also becomes friends with Valentina, bonding over everything that they went through with Darren. Although Jaxon does not like that Scarlett is friends with Valentina and the motorcycle gang she hangs out with, Jaxon and Scarlett begin dating each other. Even though Jaxon and Scarlett’s relationship is going well, she feels that there is something that Jaxon is not telling her. Eventually Scarlett gets the courage to ask Jaxon about it, but first, she wants to talk about it to Valentina. When Scarlett never shows up for their meeting, Valentina knows that something must be wrong. Soon Jaxon finds that Scarlett was abducted and he joins forces with Valentina and her gang to find her. When they finally figure out who took Scarlett, everything with Darren comes full circle and they find that although the case was solved, it was never really over. Soon Jaxon and Valentina are in a race against the clock to find Scarlett before she has to pay for everything Darren did.

Seducing the Defendant is a really great book. It is a good mix between crime/mystery and romance. It begins immediately with the crime aspect and leaves you going back and forth between thinking that Scarlett did it/didn’t do it. Then once the case is solved, it leaves you thinking that everything is going to be fine and they are finally going to live a happy life. Although things are going well, you still get this feeling that Darren’s case really isn’t over yet. The book leaves you thinking that something completely unexpected is going to happen. Then more of the crime aspect comes back and really brings the story full circle and ties it all together. It truly was a great read.

Quill says: This is a great read if you love crime/mystery and romance.