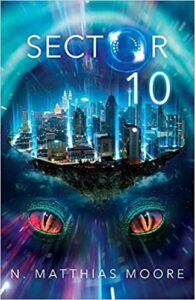 I think all sci-fi fans will agree, when a book “opens” on an intelligent reptilian commander directing a starship resting on the base of a Martian mountaintop, that you have a truly impressive tale on your hands.

First came Mr. Moore’s incredible debut novel, Cloud 9. It was more than impressive, as he hit upon realistic topics, such as advances in Artificial Intelligence, virtual reality, global surveillance, iCloud and more. He also created colorful locations that drew readers into his otherworldly adventure from the very first chapter. Well…here we are again, folks. Mr. Moore has, from chapter one, created a prequel of all things to the Cloud 9 magic that offers every reader a chance at a backstory; an unforgettable chance to see how, exactly, certain things occurred before the debut came to pass.

This author’s innate ability to establish “odd” races but also make them extremely credible is presented perfectly in this sci-fi, fantasy, thriller, adventure – you name it, the guy nailed it – story. My personal favorite has to be the Grey Order when it comes to these races, simply because they are a powerful group of shapeshifters who have survived in an alternate reality since WWII ended. (They’re guards who actually orbit between the Moon and Earth. I mean…how cool is that?) I guarantee all readers that you have not read anything so riveting since you stepped upon the planet of Tatooine and met up with a boy named Luke Skywalker who was purchasing a couple of droids for the family farm.

After Cloud 9 took readers on an adventure of mammoth proportions through the lens of a virtual reality game, along comes this amazing prequel that will knock you out. We begin at the very beginning of the year 2086. Delphi Corp. is one of those companies you’d associate with Microsoft when it comes to size and scope. They are a huge technology corporation that is head-and-shoulders above the rest. As is usual with technology, however, Delphi Corp. experiences an error in their supercomputer software; they wind up stumbling, by mistake, into a reality where an ancient war is playing out between two species referred to as the Yhemlens (AKA: reptilians) and the Greys. Trouble is coming to the man who owns it all, Ellis Bartram. He is Delphi Corp.’s CEO, and by the time he realizes what the heck has happened, people all over have met their demise. And he has no way to solve or explain this tragedy.

You now have an alternate reality where species are battling each other to take over the planet, the economy is falling to shreds, and the power of radioactivity has brought about death and destruction to members of the human race. Scientists in D.C. dive into a project head-first where they intend to fix the problems that arose at the hands of Delphi Corp. when they released this horrific epidemic on the world. The knowledgeable scientific community begins working on the problem only to find themselves stumped when they discover an alternate timeline does actually exist and this “era” set on prehistoric Earth is operating in tandem with the present. And once human beings cross over into this alternate location, they are forced to find a solution to an age-old mystery; if they cannot, their world is automatically demolished.

Parallel universes, characters you get to “meet and greet” here and then go back and pick up the debut novel, Cloud 9, in order to see how the adventure continued, creatures you’ve never even thought of before coming alive on the page—the author has offered up a fantastic prequel that helps to view his first book in totally new ways. Whether you’re talking about the time when dinosaurs roamed Earth, or you’re in love with the year 2086 and all that has to offer, there is something here for absolutely everyone looking for great writing and sheer entertainment. There are few books out there that deserve “big screen” acknowledgement, but this is most definitely one of them.

Quill says: Perfect character development, new eras, new scenery, unforgettable scenes and dialogue...Mr. Moore has made sure to bring every aspect of his creative imagination to life!

For more information on Sector 10: A Prequel, please visit the author's Facebook page.