Secrets of the Porch 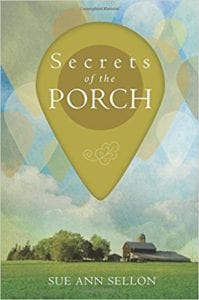 Secrets of the Porch

Sue Ann Sellon treats her readers to a heart-felt story of hope and new beginnings in her second novel, Secrets of the Porch.

Sophie Mae Randolph is sixteen-years-old and her life should be as carefree as her age. However, having never known her father and enduring the recent loss of her mother to cancer teaches Sophie life is hard. The only lesson it requires is to grow up too fast. The story begins with Sophie’s court date. After being caught robbing a gas station with her boyfriend, Gabe, the only way to avoid being sentenced to the juvenile detention center is to spend a year with her grandmother on her Nebraska farm and re-enroll in school. For most adolescents, this would be a sign come down from Heaven. As far as Sophie was concerned, it was a death sentence having never met her grandmother; let alone learning she even had one.

Reluctantly weighing the lack of options, Sophie opts for the year with Grandma. She is escorted out of the courtroom and delivered to Lila Mae Randolph—a woman with a tender demeanor and eyes that smile—definitely not what Sophie expected to see as she was turned over to her custody. The drive back to Lila’s Nebraska farm, for the most part, is uneventful. As far as Sophie was concerned, this was her destiny and once she had a plan, she would be out of there. What she didn’t expect was the outcome awaiting her arrival: a destiny with the promise of hope and new beginnings. In order to get there, however, it seems there are secrets both women must trust each other enough to tell before their truths can set them free.

Sue Ann Sellon has written a beautiful story that covers the essence of embracing love and acknowledging God’s constant vigil over all of His children. She is clearly connected to her faith and this resonates throughout the story. Ms. Sellon confidently guides her pen and proves this with her delivery of passage upon passage of powerful prose with more than a sublime insistence that we humans truly are not alone. One scene in particular speaks to the glory and essence of being guided to a love so strong and consuming because it was intended to be so: “...I felt like I had been blind before Charles entered my life, and now, I was finally alive. I had been reborn. Love had touched me. Love had saved me. Love is the greatest gift of all...I have been truly blessed...” One minor criticism, however, is the cover. Her synopsis, without question, captures the essence of the story. The title is intriguing. The cover, however, is displaced. While the imagery of the farm ties to the backdrop of the story, the watermark of (what appears to be teardrops) threw me. Where is the ‘porch’? I would caution Ms. Sellon to consider this for her next body of work. Covers really do matter. Overall, I thoroughly enjoyed the writing. Ms. Sellon has written an engaging story that encourages introspection and ‘feel good’ moments throughout.

Quill says: If the walls could talk (or in this case, the porch), how exhilarating the outcome once its ‘secrets’ have been told.

For more information on Secrets of the Porch, please visit the book's website at: secretsoftheporch.tateauthor.com