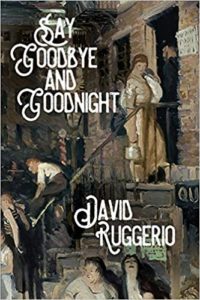 Although not on shelves until June, Say Goodbye and Goodnight should most definitely get your motor running when it comes to a memorable, brash, romantic, intelligent, and very “cool” book that will easily garner rave reviews from anyone who takes the time to sit, read, and enjoy!

As if taking West Side Story and combining it with Rocky, then adding in a romance of young lovers that rival that of Shakespeare’s famous tragic couple, this story covers all emotions. When we first meet up with Anthony Marino (AKA: “Ant”) we find ourselves roaming the streets of Brooklyn, NY, in 1977. Yes, there are discos, electric music, and the Italian neighborhood of Bensonhurst that sticks together and fights for one another no matter what. There’s even a club that sits atop a car dealership aptly named, Romeo & Juliet’s.

At 16 years of age, Ant is an integral part of this area which is, as the author states, filled with Italians whose ancestors came from the boot of Italy, as well as the “prideful people” who emigrated from Sicily—meaning you were either a housewife or a stonemason. Anthony, however, is a fighter. He is working to become that one star who deserves to beat the champ. His older brother, Sal, actually has a secret he only told Ant in order to keep it away from their father. Apparently, Sal has joined the police force instead of continuing the family line of stonemasons; this is wrong because the eldest son is expected to follow in his father’s footsteps.

That’s not the only curveball thrown at Anthony. He also lives a life that includes men high up in the Mob who he shows respect to, yet is a bit nervous that one day he will have to work for because of the close-knit family tree and the sense of duty that’s prominent in his culture. He speaks about the monthly casino run out of a warehouse, and the wiseguys who are in charge. Even though Ant likes the idea of an easy life, he is determined to be like his hardworking father who did back-breaking work in order to raise and protect the family.

When not at school, Ant practices under the tutelage of Izzy Moischel, a Jewish fighter who made his name during the Great Depression. Izzy turns boys into true pugilists at his Youth Center, which brings pride to the community. It is here where Ant first sees Gia. She walks in, takes a seat with her friends, and he immediately becomes electrified by her presence. (The author uses stunning language for this first meeting by describing Gia’s beauty as being so great that “the pallet God used to create her made Michelangelo shed a tear.”) While Gia and Ant fit together in their minds and hearts, for others they are as opposite as night and day. Jealousy and anger are thrown at them that would make normal humans walk away from the relationship. But for these two, they own that epic love that will supposedly protect them from prejudices and people who refuse to open their minds to a different culture.

On top of all this is the hunt for the .44 Caliber Killer who is harming young women in other neighborhoods. A man Ant and his friends wish to stop before he can bring tragedy down upon their heads.

You will find a smile on your face as the author uses 70’s terminology. From talking about ‘wicked storm troopers and adorable droids who took us on a whimsical journey to galaxies far, far away,’ to speaking about Elvis and how the ‘King was laid to rest but his music still reigned supreme,’ the writer draws the reader in, sets up the surroundings to exactly match that era, and tells his tale perfectly.

The addition of hand drawings in this book are incredible, as well. In the end, the lessons learned in regards to what a “good” life really is, and the romance of Ant and Gia, make this book a riveting read that causes you to stay up late in order to see what happens next.

Quill says: A book that is truly appealing no matter what genre you prefer. Ant and his world are something this reader will never forget.

For more information on Say Goodbye and Goodnight, please visit the author's website at: www.ruggeriobooks.com