Saving Gracie: How One Dog Escaped the Shadowy World of American Puppy Mills 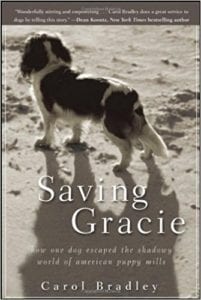 Saving Gracie: How One Dog Escaped the Shadowy World of American Puppy Mills

Gracie was a beautiful Cavalier King Charles Spaniel who had the misfortune of being born in a puppy mill . While her littermates would be sold off to pet stores and eventually find their way into private homes, Gracie’s good looks caught the eye of her breeder and she was selected as breeding stock. Poor Gracie was destined to endure a life of producing litter after litter without ever leaving her cramped crate or knowing the compassion of a loving human.

Saving Gracie chronicles Gracie’s life in the puppy mill, her rescue, and slow but eventual rehabilitation. While very little is known of Gracie’s early life other than where and how she lived, the author describes in detail the conditions within Mike-Mar Kennel, a puppy mill in rural Pennsylvania. Acting on a tip, Cheryl Shaw, a humane society police officer and Maureen Siddons, the dog warden for the county, investigated the kennel. Finding conditions deplorable, Shaw’s supervisors planned a raid for the next day.

Arriving at Mike-Mar Kennel the following morning, the SPCA expected to find up to 136 dogs. But the kennel’s owner had hidden many of his animals the day before and by the end of the raid, well over double that number of dogs had been removed. Where would they put them all?

The puppy mill kennel’s history, the raid and the ensuing court case take up roughly half of Saving Gracie.Linda Jackson, Gracie’s eventual owner, isn’t introduced until chapter 12. The rest of the book is split between Gracie adjusting to her new home, follow-up on other rescued dogs, and important legislation that resulted from the deplorable conditions at Mike-Mar Kennel. If you’re looking for an in-depth look at the love between a woman and her rescued dog, this isn’t it. While we see Linda developing a bond with Gracie, their story seems precursory to the outcome with the kennel and above-mentioned legislation.

While Saving Gracie is an easy read and provides a wealth of information on the horrible world of puppy mills, the author’s background in writing for newspapers is quickly apparent. She has a very analytical style of writing, which is dry, devoid of passion, and simply reports the facts. When the author tries to insert emotion, it comes across as forced. Regardless, the book is an easy read and will likely have the reader asking how any kennel owner could allow his dogs to live in such squalor.

At the back of the book there is an appendix with information on finding the right dog, if you buy a dog on the internet, adopting a puppy mill dog and reporting bad breeders.

Quill says: Saving Gracie will open the readers’ eyes to the plight of puppy mill dogs.