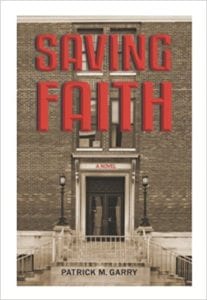 Jack Fenian wasn’t quite old enough to step foot in the Lamplighter Lounge, let alone set one up for Ev as an apology. He owed Everette Sorin big time for getting his car towed, but oddly enough the guy didn’t even seem to mind. Jack was a “repossesor,” an all too frequent employee-of-the-month for Kelly Auto Sales, whose job was always serving up a court order to repossess some poor slob’s car. Ev, a documentary maker, had been jilted by Lyra Benton and the loss of his car was nothing. Seriously, nothing. The two men began to connect and an offer of a ride or two on Jack’s part smoothed things over. One of those rides, a ride to the courthouse was, in retrospect, something they’d never forget.

“She has a name,” Clare Hammond practically shouted out, “she’s a human being.” Jack and Ev got a glimpse of Clare and Irene Valensa as they fought for the life of Faith Powers and Good Shepherd Hospital. If the hospital closed, comatose Faith’s life support would be halted. When Jack was at the orphanage he’d been stuck in an oxygen tent so he could relate. Dr. Leudtke had misdiagnosed him and no family wanted a sick kid. No one cared about him and no one really cared about Faith, an unidentified woman who was found unconscious in an alley. The whole fiasco sparked an interest in Ev and he wanted to know the real scoop. Why were these women so anxious to save Faith?

Irene, Faith’s nurse, was looked upon as “the leader of a group of people interested in saving the lives of patients like Faith,” but a small current turned into a riptide after a drive-by shooting took the life of Emily Zailles. Emily was on the other side of the fence and getting her out of the way ... well, it just might help Good Shepherd, but now the cops were investigating Irene. The story was looking more interesting to Lyra, who was one of CNN’s star journalists, but no way Ev wanted her help. A body on the pavement and one that might be snuffed out by an uncaring society pushed an unlikely duo together. Jack and Ev only had so much time to figure out just who Faith really was in order to save her, but could they? And why was Clare showing up at Jack’s apartment all hours of the night?

This is a mesmerizing story of faith, love, and hope in people who only have a modicum of any of those three desirable elements in their own lives. The “faith” is embodied in an unidentified comatose woman dubbed “Faith,” a woman whose very existence moves those around her to examine the meaning of their lives. The tale definitely has a good hook, one that kept me interested as I too wondered what Faith’s future would hold. The characters quickly became enmeshed in each others' lives after a chance meeting and a quick glimpse into a courtroom. The premise that Jack, someone so young, but so wise beyond his years, would be an associate of Ev and Lyra’s was somewhat unbelievable, yet worked. The twists at the end whirl as they bring a sudden and unexpected conclusion to this uniquely mysterious tale.

Quill says: If you want to reexamine the meaning of life, simply taking at its mysteries through Jack Fenian’s eyes is definitely an eye-opener!

For more information on Saving Faith, please visit the author's website at: patrickgarry.com/books/saving-faith/