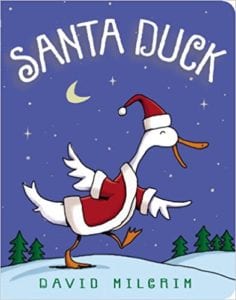 Ho! Ho! Ho! It’s Christmas time and Nicholas Duck is worried! Christmas is just one day away, but Nicholas forgot to tell Santa what gifts he wants. If Santa doesn’t get Nicholas’ list, then this adorable duck might just find socks and underwear under his tree this year. Thus starts the charming adventure of Santa Duck.

When Nicholas Duck leaves his house to search for Santa, he finds a wrapped box on his doorstep. The happy duck is thrilled when he opens his gift and finds a Santa suit. Quickly putting the outfit on, Nicholas continues on his journey. Soon, however, Nicholas is accosted by all sorts of animals who think that he is the real Santa Claus. One after the other they tell Nicholas what they want for Christmas. In despair, Nicholas finally runs as fast as he can away from all the other animals. In his rush to escape, the flustered duck runs smack into Santa Claus. Nicholas quickly tells Santa what all the other animals want and then he heads home to wait for Christmas. But as he walks home, the poor duck realizes he’d forgotten to give Santa his own wish list. Arriving at home, Nicholas finds a note from Santa thanking the duck for his help. It is then that Nicholas realizes that helping Santa “was the best gift he could ever get.”

This is a very sweet story that will have kids reading and re-reading it every day until December 25th. The pictures are simplistic in a way that kids will love, bright, cheery, and Nicholas’ beak is stuck in a permanent smile – sure to bring a smile to every child’s face.

Quill says: A fun book that teaches children that giving is more fun than receiving.