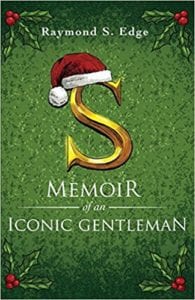 It is said that fame is fleeting, but when one is an iconic figure, it doesn’t quite work that way. Misinformation abounds and swirls about like the snows on Mt. Kilimanjaro around some people, but none more so than those concerning Santa Claus. Ho, ho, ho, nobody knows, but the old guy himself. Santa simply wants to make things clear in his memoir that under no circumstances did he ever “run over a grandmother” and other such nonsensical foolishness. Only Santa knows what has transpired over the past 1,700 years of his life and he figures it’s about time that everyone else know as well. Mrs. Claus has probably heard the same old, same old stories more often than she cares to hear them, but if you haven’t, you’re in for a treat.

Of course it all has to begin somewhere and that somewhere was in Patara, “in the nation of Lycia, in the year of our worthy Lord, 280.” A babe named Nicholas was born to wealthy parents, who were considered to be rather elderly in that day and age. Fifty is considered young these days, but way back then it was ancient. Alas, despite a very happy home and childhood, poor Nicholas was orphaned at an early age. The lad’s inheritance was hefty and the decision had to be made as to what to do with it. It crossed Nicholas’s mind that Jesus said “we must treat others as we wish to be treated.” The lessons he learned in his second home among the village priests certainly weren’t lost upon him. What would he do with his life, his fortune, and the lessons learned?

Santa Claus, the legendary figure, an iconic one we are all familiar with ‘round the world, was once an unknown boy. There was no one to direct him in his well-known gift-giving venture, but rather he honed his craft over hundreds of years. It all began when the misfortunes of Shem, a prosperous citizen, came to light. He was a marine merchant whose “storms had driven [his] vessels aground.” Everything was lost and only one thing was gained...poverty! Shem had three daughters, daughters who no longer had the reassurance of dowries. A plan began to take place in Nicholas’s mind. He would give them pouches of gold, but there were no chimneys in those days so what to do? Ah, but there was such a thing as a ladder...

This is a fun, charming memoir of a gentleman known ‘round the world. Of course Santa has gone by a few names in his day, many we are familiar with. What many of us don’t know is just how Santa came about filling those stockings, learning how to make those toys, becoming that jolly chubby fellow we know, why he didn’t age, and a myriad of other little facts. Oh, and just how did he meet Mrs. Claus? You’ll find out all of those things and many more. Perhaps the unexpected treat, even better than cookies and milk, was learning about Santa’s adventures through time. We meet several historical figures who influenced him, adding to the Christmas traditions we celebrate today. Do you know how Leonardo da Vinci helped Santa create more efficient toys? If not, you’ll just have to read this book to find out!

Quill says: If you want to know the *real* truth about Santa Claus, perhaps even things Rudolph doesn't know, this is the book to read!

For more information on S: Memoir of an Iconic Gentleman, please visit the site: redoubtbooks.com