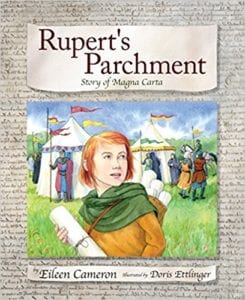 The country is England and the year is 1215. Like most youngsters who must learn a trade, twelve-year-old Rupert works with his father, learning how to make fine parchment. One day while he and his father are out delivering skins to Rupert’s uncle, two sheriffs appear and decide to take the two carts of skins. “That’s not fair!” cries Rupert but unfortunately, in 1215, the King, and his minions, could do whatever they wanted.

While Rupert and his father were justifiably upset with the actions of the King’s men, the barons and bishops of England had also had enough of the King’s actions. King John needed tax money to maintain his army but the barons were tired of paying so many taxes and being at the whim of their king. Something had to be done...

Rupert’s Parchment is the story of the Magna Carta, as seen through the eyes of a young boy. We see how Rupert and his family are treated by the King’s men, as well as the dissatisfaction of the nobility. The reader will learn about the meeting between King John and others that led to the creation of the Magna Carta. While a few words may be difficult for some readers, there is a glossary in the back that defines many of the terms. There is also an “All About Magna Carta Principles, People, and Places” as well as a side-by-side comparison of five of the clauses of the Magna Carta and five of the amendments of the U.S. Bill of Rights. Rupert’s Parchmentbrings an historical event, from the Middle Ages, to life for young readers - the perfect book to start a school project or simply learn more about a very important event that helped shape the United States' government.

Quill says: Rupert’s Parchment is a good story for youngsters eager to learn about this very important document and the history behind it.