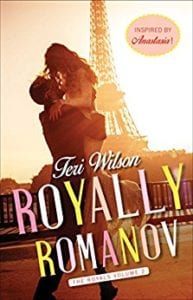 In front of Notre Dame Cathedral, on Point Zero, Maxim Laurent is found beaten half to death. The problem is, he has no idea why. Because of being beaten so brutally, he has temporarily lost his memory. All he is left with is a notebook, a sinking feeling he must have done something terribly wrong and the vision of a girl who he has never met before in his life – only in his dreams. Barely remembering his own name or who he is, he searches his notebook for clues. Only one specific detail stands out, one sentence on the page: “I am Maxim Romanov.” With the Romanovs being dead for nearly 100 years, executed by the Bolsheviks, this seems unbelievable, however, his notebook states that the Grand Duchess Anastasia is, in fact, his grandmother. While many believed her to be alive as a result of escaping, her remains were said to have been found, making Maxim’s forgotten past just that much more difficult. It’s clear the Maxim is going to need help to put his broken past together.

Finley Abbot, a curator for the Louvre, just finished a book about the Romanovs and is preparing an exhibit of art from their dynasty. An expert in her field, with a distinct interest in the Romanovs, she seems to be Maxim’s best bet. Although she is taken by his relatable story of being assaulted and interested in his claims that he is a Romanov, she believes him to be a con-artist, as it’s widely known Anastasia’s body has been found and there is no way she could have escaped. Even more suspicious is the fact that Maxim suddenly appears and claims to be a Romanov, as the hundred year anniversary approaches. The Century Rule states that those who have been victimized by government policy have 100 years to claim any art or objects of value that have been taken. Those who have been victimized get to take back the art as restitution. Maxim could lay claim to the entire exhibit, if it's proven he is a Romanov, and not only ruin everything Finley has worked for, but it could also put her reputation and career in jeopardy. However, something keeps holding her back from simply dismissing his claims and she is unable to walk away or separate herself from his situation. Is it because of his deep, dark eyes and brooding demeanor? Is it because she’s actually falling for him? Or is there truly something there that could change all of history, in many more ways than one?

Just like Royally Roma, the first in the series, Royally Romanov is addicting and hard to put down. The hint of mystery and suspense propelled the story and served to enhance the romance in a way that kept it from being overbearing. Having been to France, it was nice to see the description being so vivid and I especially loved that I learned an entire theory that I didn’t even know existed. With the hundred-year anniversary of the execution of the Romanovs coming up, this was extremely relevant and interesting. I love how many elements mixed together to make this book truly enjoyable, from the mystery and romance to the history and knowledge. Truly a wonderful read.

Quill says: Royally Romanov is the perfect blend of mystery, romance and suspense. Just as great, if not better, than the very first in the series.