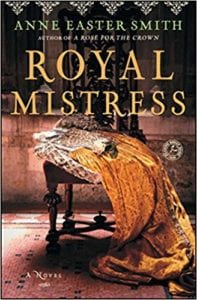 Ms. Anne Smith's latest historical novel, Royal Mistress is an intriguing story that is composed of a series of events that occurred in the fifteenth century. Jane Lambert is portrayed as a beautiful, kindhearted young lady who has a magnetism that attracts men. However, despite her beauty and intelligence, she is still unmarried at the age of twenty-two.

Due to her flirtatious nature with men, her father, John Lambert, who is a mercer of London, is concerned about protecting her reputation and his good name. He is determined to find her a suitable husband. Unbeknown to him, Jane was attracted to Thomas Grey, the Marquess of Dorset. Although her heart belongs to another, she is forced to marry an impotent and older merchant, William Shore.

During her loveless and boring marriage, she remained hopeful of finding true love. Her attractiveness is soon observed by the king’s chamberlain, Will Hastings. He is captivated by her charm and mentions her to his friend, King Edward IV, who has an insatiable appetite for women.

After seven years as his mistress, Jane assumed the king would become bored of her. On the contrary, she had the strongest effect on Edward. Although he had numerous mistresses, Jane remained his favorite. With her at his side, he discovers love and happiness. However, this is short lived.

As a result of Edward’s endless indulgence in sensual pleasures and his failure to continue being the powerful leader for his country, catastrophic events occur and affect the life of Jane and William Hastings. After Edward’s death, his younger brother Richard III became the new head of the monarchy. He is intent on amending Edward’s immoral court. Jane will have to use her intellect to survive the ordeal in which she is suddenly placed.

Ms. Anne Easter Smith is very talented in writing historical fiction novels that are accurately researched and realistic. As dramatic events unfold in Royal Mistress, readers are drawn into the compelling tale of life in the court of Edward IV.

Quill says: Royal Mistress is an unforgettable story that consists of courageous characters, romance, and suspense. I would highly recommend this excellent novel to readers who enjoy a delightful journey to the fifteenth century.