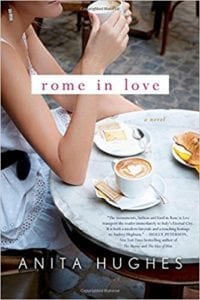 This is a tale that is funny, warm-hearted, captivating, and has all the exuberance that you would expect from an author who has repeatedly published mesmerizing stories.

With this tale, Audrey Hepburn comes alive (not literally, of course, but it’s just as fun). It is present day and Amelia Tate has taken over the ‘must-see’ chick category when it comes to the entertainment industry. In fact, she is cast to step into the hard-to-fill shoes of Audrey Hepburn for a remake of the classic and beloved, Roman Holiday. Now, this is even more awe-inspiring for Amelia, as Hepburn is her absolute idol. (And, let’s face it, having a vacation in Rome with your hot boyfriend while filming is a definite plus, as well.)

So Tate heads to Rome with basically the perfect life. Once there, she meets up with a girl named Sophie. As a team, increasing their friendship day by day, they take in the sights and sounds that Rome has to offer (which is a long list). Yes, all is well, until...the girl who was madly in love starts to see that being in love AND having a career that is off the charts is not something the love of her life can deal with. So, he checks out, leaving Amelia to struggle over what she wants most out of life. Who can she turn to for help? Audrey Hepburn, of course. The young actress just happens to stumble over some old letters written by Audrey while she was in Rome, as well as stumbling over a new man - a journalist by the name of Philip. Amelia finds herself falling for the guy (and taking some of Hepburn’s advice along the way). Only trouble is, Philip thinks she’s someone else and Amelia can’t seem to figure out when to tell him the truth...or even if she should.

Love, fun, romance, this one’s got it all. And, quite frankly, readers will get lost in the beauty of Rome, and their stomachs will growl while sitting in their living rooms imagining the luscious food and wine they could be enjoying in The Eternal City.

Quill says: An enchanting tale that will make one and all want to run out and get their passports so they can somehow flee to Rome immediately!