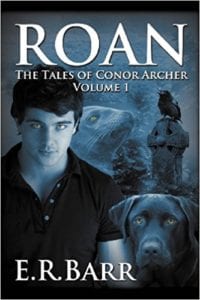 From the fantastical to the emotional, this is one book that hits on all cylinders. In fact, not since Potter has there been such a large story with so many intricate characters; except this one also gives the Celtic twist that all lovers of Irish knowledge, history and beauty will absolutely adore.

The Tinkers are a group that went through a great deal back in their homeland. Their story involves a mystical plot: Upon exiling themselves, they headed out to find a new place to live. However, the Tinkers men folk actually fought with shapeshifters called Roan, which come from the depths of Celtic mythology. The wives returned as seals, but their pups transformed into human children. These 'human' children were granted the name 'Dark Ones' by the Tinkers who accepted them as family.

Upon reaching the New World, this group settled in a beautiful spot where actual legends came to life; and there they sat, while the townspeople around them kept the Celtic secrets and made sure no one was ever aware of the 'Dark Ones.'

This is the myth; this is the legend; and this is exactly what main character, Conor Archer, learns about after landing in Tinker’s Grove, Wisconsin. Conor came to the state with the weight of the world on his shoulders. Sent by his mother, who’s dying words told him that he must head straight for the location, Conor actually arrives in the small town succumbing to an illness that he does not understand; a type of sickness that makes Conor more than just a human.

Conor’s health improves with the help of an abbot, but he soon finds himself locked in a struggle between myth and reality. The Roan, the 'Dark Ones' - all of the mystical characters are there to join him in his battle between good and evil in order to save humanity as a whole.

The suspense and action intensify as Conor begins to change. Not only does he gaze at a river demon, but his visions of beings that could not possibly be real grow in number. On top of all this, Conor must wage war with a rich landowner who has no interest in anything but money and establishing absolute power.

Add in a bio-geneticist, an immortal Welsh prince by the name of Madoc, and a town that has literally gone crazy with panic believing that their long silence may just come back to harm them, and you have a book that brings all manner of hero and villain to life.

Although some may refer to the book as a bit 'wordy' in spots, the words are riveting. The scenes are larger than life, leading the reader to actually feel as if they are standing by the side of Conor, just waiting to see what happens next.

Quill says: Well done for a debut novel. Readers, however, will need to amp up their patience as they beg to know, 'what happens next?'

For more information on ROAN: The Tales of Conor Archer, Vol. 1, please visit the author's website at: www.erbarr.com