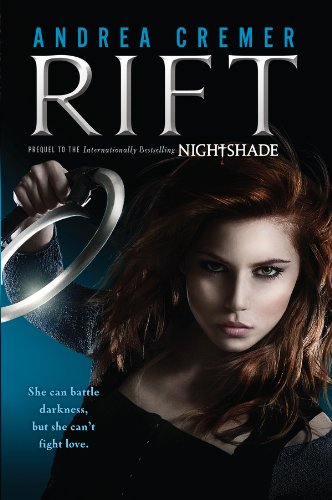 Okay…everyone’s waiting for this one and very soon, come August, you’ll have it! So…let’s give you a little heads-up on what you’re about to delve into, shall we?

The Nightshade trilogy by this author took readers into a paranormal world. Oddly enough, it was unlike ALL the other paranormal series’ out there. Which, number one, is extremely difficult to do because there are a TON of them. But with this book, fans AND non-fans of the series will have something to talk about because the author has offered a PREQUEL to the trilogy and went out of her way to make sure it was different, cool, classic and with characters that you not only idolize but actually want to be.

In Rift we begin with a nobleman’s daughter. And boy, does she wish she was a boy. Ember is the girl who wants to fight. She wants to ride horses, become a warrior, be valiant, use a sword, etc. Her sister, Agnes, is the one who she wants to take over the ‘girlie’ part of the family. After all, Agnes loves gowns and is actually only a month away from sailing to France and being married off, which she wants to do…maybe.

When Ember was born it was a hard birth. In fact, her mother was basically going to die during the delivery. What happened was that Mom was given magical help and her soul was saved. The price? One soul for another. When Ember turns sixteen she is to be taken by the Conatus. This a very cool order that was a split-off from the Templar Knights (the ones who the Pope disbanded and then proceeded to kill). The Conatus pretend they are supporters of the Church when the Abbott is around, yet the villains they fight are more, shall we say, mystical creatures who are trying to take over the land.

When Ember is taken there - escorted by her best childhood friend who has far more than friendship in mind for their future together, she also meets up with another member of the Elite Guard - named Barrow Hess who will soon become her mentor…not to mention the man she wants with her whole heart and soul. The battle begins as the Conatus find that young Ember has more power and natural ability in her pinky finger than most of the guard have in their whole body. And she will become part of a group that may or may not end up liking each other and supporting each other when all the dangers and villains of the world descend.

This novel offers some amazing scenes. One that you won’t forget is when Ember and other initiates must choose between three rooms: one of Knowledge, the room of War and the room of Craft. (These are the three factions you can join when you go to Conatus. I, for one, would kill to see that room of Knowledge.) Then, when Ember’s weapon must be forged and when her horse must be chosen - all of this is sincerely unforgettable. The men are dreamy and heroic, Ember is tough and sassy, the Abbott is into blackmail, and the Warrior Sisters are people you really want to hang with! This author has increased the ‘thrill’ of her trilogy a thousand-fold by showing a new ‘beginning.’

Quill Says: Read it! Again, if you love Nightshade you’ll be over the moon. If you’ve never read the Nightshade series, this Prequel will have you running to get them!