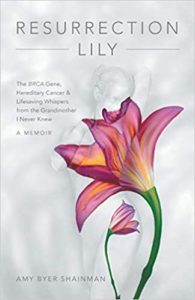 Resurrection Lily is a memoir by Amy Byer Shainman that revolves around her having a BRCA gene mutation that greatly increases her risks of developing certain kinds of cancer. In this book, she shares the remarkable story of her life spent fighting it. She describes her inner struggle making the decisions to undergo preventative surgeries that will reduce her enhanced risks and paints a vivid portrait of her experience as a high-risk patient.

Shainman tells not just her own story, but weaves together an expansive history of cancer in her family and friends. It seems everywhere she turns she is confronted by the disease, and instead of standing by passively, she attacks first, both protecting herself and becoming a patient advocate for others facing similar situations. She frames her experiences with cancer like a battle, explaining, “My competitive nature and drive that had begun on the soccer field was lending itself to this medical situation. I wanted to be in control of things. I didn’t want any surprises.” (Shainman 53)

Resurrection Lily dives deep into the medical world, tackling complicated topics like genetics with straight-forward and easy to understand explanations. At the same time, she is also very blunt and doesn’t sugar-coat any of the ugliness that comes with fighting cancer. Shainman details the importance of both genetic testing and genetic counseling in families with medical histories of cancer, while simultaneously describing her own worries and concerns.

Even with the focus on medical explanations, Shainman’s memoir is still raw and emotional. As she is preparing for her prophylactic bilateral mastectomy and breast reconstruction, she is hit with the news that her friend Kristin, a woman in a strikingly similar situation as herself, is dying. “Her impending death hits me in a deep place. It makes me want to go cut my tits off right now.” (78) This hurts Shainman and it hurts the reader. Throughout her story, Kristin is presented as one of the strongest people Shainman has ever met. If someone like her can succumb to cancer, then anyone can. Shainman is admirably open about her experiences, sharing everything from intimate family medical history to moments like Kristin’s death.

Shainman also makes a point to discuss the media reaction to the BRCA gene mutation. It moves into the public light after Angelina Jolie opens up about her own diagnosis through two different op-eds. Shainman is especially vocal about the different news outlets consulted while covering the story. “...most of the interviews I read or saw on the news were with a physician who did not specialize in genetics. Since Jolie’s initial op-ed article was such a huge story, a global story, it seemed to me that many news outlets, television shows, and radio stations were just scrambling to get any medical expert on the air (no matter the person’s qualifications) as fast as they could.” (187) She goes on to explain the missed opportunity to spread awareness about the risks male carriers of the BRCA gene mutation face. Shainman is concise in her explanations of why both the media reaction and Jolie’s articles left some things to be desired.

Resurrection Lily is a powerful and intelligent memoir from a woman forced to make difficult personal health decisions. Amy Byer Shainman takes her readers through every step of the process. She goes out of her way to teach patients how to advocate for themselves and seek proper medical treatment, a sometimes daunting task. Readers will close her book with a sense of empowerment, thinking about their own family medical history and genetics in a way they might never have done before.

Quill says: Resurrection Lily is an applause worthy memoir that will affect its audience in deep and unexpected ways.