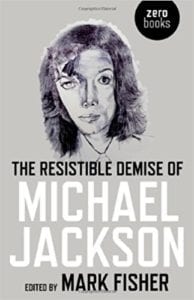 With the recent passing of Michael Jackson, an avalanche of books have been published that explore the “King of Pop.” While most of these are biographies, one, The Resistible Demise of Michael Jackson, is an eclectic mix of essays written by various writers involved in the music industry.

The Resistible Demise of Michael Jackson offers a total of 24 essays on just about every aspect of Jackson’s life as well as analysis of his songs and dances. Topics range from Jackson and the British experience of pop, Thriller as allegory, Jackson and Bollywood, and the inevitable comparison of Jackson and Presley.

In “Michael Jackson’s twenty greatest hits,” we’re given the writer’s view of Jackson’s 20 greatest hits. These songs are presented “in no particular order,” which the reader might find annoying. To add to the frustration, the author, Paul Lester, doesn’t include “Thriller” in the list (he doesn’t like it) but does include a visit to the White House/Reagans and the HIStory statue. Apparently, “hits” implies anything from Jackson’s life, not just songs. In “True enough: Michael in fifty shards,” author Chris Roberts presents fifty imagined (or are some based on fact? It is unclear.) scenarios involving Jackson. Some are interesting or mildly amusing, while several are bizarre or border on bad taste. Tatum O’Neal wanting to “get it on,” with the singer, Jackson working in a lab to discover an elixir of eternal youth, and Jackson being hypnotized by Uri Geller are a few of the odd “shards.”

If you’re a huge Michael Jackson fan, this may not be the book for you. It is clear that quite a few of the writers are not admirers of Jackson. I admit to not being a fan but I do recognize the amazing talent Jackson possessed. With that in mind, several statements had me scratching my head in puzzlement. Jackson’s music was “lyrically gauche or banal and musically so ordinary and unadventurous” (pg.18), “Much of ‘Thriller’ seemed clumsy and clichéd” (pg. 18) to “Janet’s a better dancer” (pg. 81) are certainly not the prevailing views. These unorthodox claims appear more frequently in the early essays and will undoubtedly have fans screaming in disbelief. Later articles do offer opposing views, “’Thriller’ is crisp, urgent and dramatic” (pg.93) which helps to alleviate some of the negative feelings this book may elicit.

As with any collection of essays, each written by a different contributor, the writing styles vary greatly, from tight, crisp articles to those that wander through various treatise without ever settling on one topic. Several offer quotes, "'I can’t go out in the sun,’ he admitted to a close friend” (pg. 251) without crediting the source. In the end, it is important to remember, as noted by one writer (“it seemed to me,” (pg. 139)) that these essays are primarily the writers’ opinions. While it is nice to read a book that isn’t a tribute to Jackson, but rather a deeper analysis of his work as seen through the eyes of many authors, there are some atypical ideas presented in this book.

Quill says: Stick to the articles that analyze Jackson’s songs and dances and you may learn a few things about the “King of Pop.”