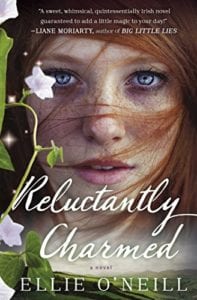 One of the countries I have always wanted to visit is Ireland so anytime I find a book related to Irish folklore I definitely grab it up. With the book Reluctantly Charmed by Ellio O’Neill I was instantly swept up in the whimsical legends of fairies with a modern twist that made for a great and intriguing story.

When Kate McDaid comes upon her twenty-sixth birthday she has a few things she is focusing on to make better in the near future. One of those is her job where she has been hoping for a promotion, and then the other is her social life that has not been going so great up to now. However, she has a positive outlook on what is coming up next but never in a million years did she expect such an unusual invitation from a long gone relative. The invitation comes from a local attorney who requests Kate’s presence at the reading of a will of her great-great-great-grand aunt who was also named Kate McDaid. In this will Kate is told that she will inherit her ancestor’s estate if and only if she publishes a series of seven poems called “The Seven Steps.” Thinking that she could easily publish these steps on a forgotten blog page that no one will ever be interested in, Kate sees this as an opportunity to inherit something great, for an estate must include something extravagant. So, deciding to go through with publishing these steps she puts up the first poem not expecting anyone to see it or even care what it says, however she could not be more wrong.

In a matter of days Kate has a huge group of followers who are obsessed with these steps thinking that if they continue to read them they will be able to communicate with fairies. Suddenly Kate finds herself an instant but reluctant celebrity as she finds that being famous means nothing in her life is private. Now her every move is followed, her every word is listened to, and everyone is holding their breath as each of these seven steps are revealed. As she nears the final step, however, Kate may have to decide if publishing the seventh step will cause more harm than good.

From the very first page I enjoyed every bit of this story as I thought it expertly combined whimsical legends of the past with a modern setting. Using the blog on the internet as the way to publish the steps brought the story into the present as of course the internet is a huge part of everyone’s life. The changes that Kate McDaid had to make as she went through this journey made her easily relatable and each time I sat down with this book I could place myself in her shoes perfectly. This was a great book that I would recommend to anyone.

Quill says: This is a fantastic combination of a modern character and setting with an intriguing fantasy legend that will have you quickly turning pages.