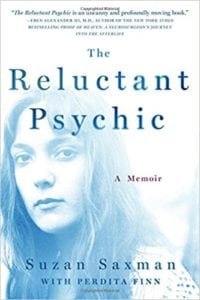 Susan Saxman shares her gifted psychic experiences between the covers of her memoir, The Reluctant Psychic.

The 60’s were a time of make love, not war and little did Suzan Saxon know that her psychic gift would take her on a life’s journey that erred more toward the side of turmoil than peace and love. From an early age, Suzan knew she wasn’t the teddy bear tea party princess. Most kids had a fear of monsters in the closet at some point during their tender years until they eventually vanished into the never after. For Suzan, however, the monsters never left. At the risk of sounding proverbial, she saw dead people...everywhere. This isn’t to say they were foreboding by any means. Rather, they came to her because they had a message to deliver to their departed living and Suzan was their conduit to do so. For many years, Suzan would awake in the middle of the night and as real as the sun in the sky is, the dark man with the black-rimmed hat and eyeless sockets of flames would be there. It wouldn’t be until many years later she would understand his full meaning and purpose in her life.

Suzan’s relationship with her mother was, for the most part, non-existent. There was a strong undertone throughout their lives together that Suzan was a mistake that should have never happened. Her insignificance was a daily reminder to her mother of the random act of infidelity she should never have performed. Suzan’s real father was a drifter and he loved the ladies. He loved Suzan’s mother, but there was a vast space between such love and actual commitment. Suzan’s everyday father was a good provider, but an uneventful being. Adding to the complexity of her family dynamics would be the years of struggle and skepticism she would navigate before she would be able to come to terms with her tremendous gift.

Suzan Saxman has done an exceptional job of penning an extremely interesting view of what it means to have genuine psychic abilities. Her writing of the subject and her first-hand experiences further affirm there is no ‘hocus pocus’ or ‘folly’ to what she has endured during her life. There is a sense of urgency throughout this book and the reader is able to grasp that her intentions in writing of her life wasn’t to gain a following. Rather there is a sublime calling to all her fellow ‘seers’ that it’s okay to talk about your experiences and embrace the reality that there truly are many spirits surrounding all of us. It is abundantly clear that Ms. Saxman took great care in the mechanics of telling her story. Each chapter outlines a particular point in her life and she closes each premise with a vignette of a reading she conducted. There is a balance of those who believe and those who think “poppy cock,” but it is up to the reader to decide which side he or she migrates toward. I applaud Ms. Saxman for the courage and tenacity to tell her story because there is a strong voice throughout that's non-apologetic. Rather, she is a woman of substance who tells it like she lived (and lives) it and affirms throughout the notion that there are NO coincidences in this life we live. Rather, there is an entire sub universe of what’s happening and it is there for the believer to dive in and explore. Thank you for a truly engaging memoir Ms. Saxman. I hope I have the good fortune to find my way to Woodstock some day and the pleasure of a chat.

Quill says: The Reluctant Psychic is a testament of courage, strength and conviction from a woman who knows she is ‘different’ and embraces and accepts who she is.