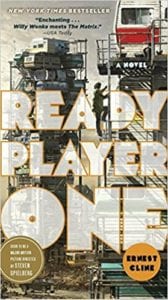 Wade Watts is a young boy who lives in Oklahoma. However, it is not the Oklahoma of 2011. This is Oklahoma as it looks after three decades of the Global Energy Crises and watching the animal and plant life die on Earth; wars are still being fought and the economy is so bad that most are starving in the streets. Wade is an orphan who watched his mother’s dreams disappear, and is now living in his Aunt’s trailer that sits at the top of the ‘stack.’

Yes, this world of 2041 no longer has trailer parks with individual mobile homes; here, each home is ‘stacked’ one atop the other, sitting beside the crumbling overpasses in the dying world. Wade went to ‘real’ school until he finished sixth grade, only to watch the educational system go belly-up. Kids were then “hooked online” to a virtual school. Quite frankly, most of the day is filled with this virtual wonderland called OASIS, leaving reality far behind.

OASIS was created by a man named James Halliday, (a mixture of Bill Gates and Howard Hughes), who was a multimillionaire from producing the largest computer network of all time. James Halliday was also a true lover of the 80’s - everything from movies to music to television shows, and the very first Atari games - Halliday was an 80’s worshipper. When he passed away, he left a videotaped will and testament behind. Because he had no heirs, he announces that there is a hidden mystery inside his powerful OASIS, and the first person who figures out the riddles, gets the “keys,” and jumps through the gates, will win the “egg,” AND win his 240 million dollar fortune.

Wade loves James Halliday and has spent many years researching everything about him, while falling in love with everything the eighties had to offer. With Wade’s ultimate knowledge, and a few friends he meets along the way in the virtual world, Wade begins to do what no one on Earth has been able to do since Halliday passed; Wade is figuring out the clues and heading to victory. Unfortunately, there are evils out there in cyberspace called The Sixers. They are the contract “hunters” - the game-masters that have been hired by IOI to find that elusive “egg.” IOI is the huge conglomerate that wants to take over OASIS and the world. So…not only does Wade have to figure out the clues, recognize which “avatar” friends are evil and which ones actually care for him, fall in love with his first girl, and win the money - but he also has to stay a step ahead of the IOI and their mercenaries, because they are ready to kill him at every turn. Wade’s life may just end up as “Game Over” way before he’s ready to die.

This will be a much-loved book for any true 80’s fan. From Joshua, the computer in War Games, to the scenes from Heathers, and dialogue additions from stellar movies like, Ghostbusters and Airplane - Ernest Cline has put together a story that offers readers the absolute best memories from the absolute best era!

Quill Says: The ‘Geek Speak’ is fantastic as Cline reminds us that John Hughes is mightily missed, and that Dungeons and Dragons, Pac Man, and Space Invaders are still the real stars!