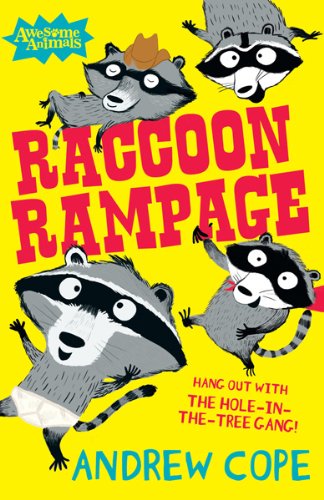 Calamity Colin, “the roughest, toughest and meanest raccoon in the forest” had nothing on the Hole-in-the-Tree gang when they were ready for mischief. Rocky, Sunshine Cub, Dempsey, and Quickpaw Cassidy had a plan to check out old man Max’s store again to find a few provisions at three-o’clock in the morning. No way that guy was going to catch them snagging a snack, or so they thought. “Either robbers or raccoons,” Max shouted out, “Either way, they’ll be in trouble.” And in trouble they were when they all scrambled to hide because Rocky could only find a little spot in the cash register. Cha ching!

“Better check the register,” Max said to no one in particular. Caught ... again. There was a mad scramble to get the heck out of the store, but this time the Hole-in-the-Tree gang had done it. Only one more big heist and they’d be all set for winter. Quickpaw had a cunning plan and that was to unload a bit of fish from Max, but instead he met up with McCluskey and his baseball bat. “Pesky varmits,” Max yelled out, “stole my money and now they’re thieving my fish!” It looked like they had to hightail it off to the city, but would city life agree with four mischievous raccoon cubs?

The Hole-in-the-Tree gang are in for trouble when they head off to the B-I-G city. Of course these four little wild and crazy raccoons don’t mean any harm, but they sure can create a ruckus every time they think up a scheme. Their zany antics definitely will appeal to young readers, especially reluctant ones. The silly humor threads its way through these pages right along with illustrations that show these wide-eyed cubs at work creating havoc wherever they go. For example, in response to a cat’s meow, Sunshine says, “You sure have a bad throat, sister.” If you have a youngster who has a good sense of humor and loves animal adventures, he or she will love spending time with the Hole-In-the-Tree gang!

Quill says: The "Awesome Animals" series is perfect for young mischief makers who enjoy seeing other young critters in action!