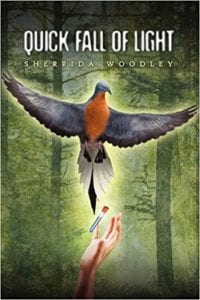 Josephine Russo is a widow struggling to deal with the violent, unexpected death of her husband Robert. An ornithologist studying wild finches at the University of Washington, Robert was flying his plane to a remote area near Fraser, Washington, to study his beloved birds when the crash occurred. His death, strangely enough, coincided with the first deaths from avian flu at the other end of the country. Josie can’t help but feel that Robert is somehow connected to the growing flu epidemic.

In part to learn more about Robert’s death (was it really an accident?) and partially, perhaps, to run away from her own life, Josie climbs in her car and begins to retrace Robert’s steps before his death. She soon finds herself deep in the national forest where her husband’s plane crash occurred. While searching the wilderness for clues, she stumbles upon Gary Sterns and his two horses. Gary is a logger with a rather gruff exterior, but when he finds out who Josie is, he insists on showing her “something.”

Josie follows Gary through the thick forest growth to a compound surrounded by a chain-link fence. But there is far more he needs to show Josie, and so she reluctantly gets into a “Bosun’s chair” made to hoist people high up into the tree line. On a platform at 300 feet, Gary hands Josie a pair of binoculars and she focuses on Robert’s car, inside the compound. Josie then asks, “What secret lives there?” (pg. 46)

High above the ground, Josie learns that her husband was indeed keeping secrets from her. As she continues to search with the binoculars, she sees an amazing site. A single bird, a pigeon, grabs her attention. But it’s not just any pigeon, it’s a passenger pigeon, thought extinct since the early 1900s. Like Robert’s death coinciding with the outbreak of the recent flu epidemic, the passenger pigeon’s demise closely mirrored the arrival of the 1918 flu that killed millions. Is there a connection?

As Quick Fall of Light unfolds, we learn that Colzer-Bremen, a pharmaceutical company, has been using the last remaining passenger pigeons to create “Pass-Flu,” their strain of anti-flu vaccine. But each time they came up with a vaccine, it seemed the flu virus mutated and they’d have to start creating a stronger batch of vaccine. Unfortunately, the use of “drug-mining” the birds for the vaccine was taking a heavy toll on the flock and as Josie and Gary dig deeper, they discover the many secrets Robert kept from his wife.

When Josie and Gary learn that Robert trained one bird, Gem-X, for a special project, they are convinced there are hidden secrets behind the doors of Colzer-Bremen. Determined to learn the truth, the pair set out for Darby, Nebraska, where the original flock of passenger pigeons still reside. Unfortunately, it’s not so simple to just drive to Nebraska. The flu is ravaging many areas, there is an enormous wildfire in the way and Martin Pritchard, a strong-willed and dangerous man, has been hired to stop them. Promised a lot of money by his boss at Colzer-Bremen to stop Josie, Pritchard will stop at nothing to see his mission accomplished, especially once he learns his young daughter may be in danger if he doesn’t succeed.

I was quite captivated by the premise of Quick Fall of Light. That a species thought to be extinct might have actually survived, that a drug company would stop at nothing to get their needed medication, and that a woman who simply wanted answers to why her husband’s plane crashed was drawn into a mystery that would affect the entire world was original and fun. I was also fascinated by Gem-X, the special passenger pigeon that Robert had trained. What had he been trained to do? And just what was his connection to Josie?

While this book offers a unique storyline, it should be noted that it is not an easy read. The author’s style, while certainly descriptive, was also somewhat dense. I found myself having to re-read various sections to make sure I understood what had just happened. To add to this difficulty, there is a large section of text where Josie is ill and it wasn’t always clear what was going on – was she just feeling a bit under the weather, was she violently ill and having hallucinations, or maybe it was all a dream? Perhaps this was the author’s intention, to weave the confusion of the illness into the story, but it did add to the difficulty in reading the book. Still, the characters are very well developed and I found myself caring about Josie and Gary and particularly Gem-X and his flockmates. This is not so much a story about a flu epidemic as it is about the people thrust into its midst.

Quill says: While not an easy read, Quick Fall of Light delivers a good mystery for people who like a bit of science and ornithology mixed into the story.

For more information on Quick Fall of Light, please visit the book's website at: www.quickfalloflight.com