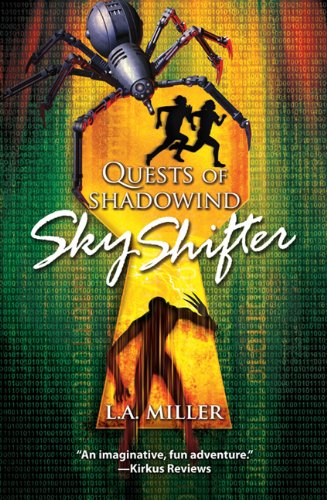 Ah…to be young again. That is exactly what this book will remind adults of, while at the same time allowing all young adult's out there to have an absolute ball.

Logan and Mindy Oakes are brother and sister - and they are hysterical. Yes, they stand up for one another and stand beside one another (while they’re teasing, taunting and getting each other in trouble when they can - just like great siblings are supposed to do). What they don’t expect however, is after a party to celebrate the thrills of summer vacation they wake up to find themselves in a house they’ve never seen before, in a neighborhood that’s bombarded with everything from talking anibots to a mechanical spider (with feelings), and huge mechanical ants that work hard to build and repair things.

But they’re not the only ones who wake up in this 'new' world with no parents anywhere; their friends are there as well, and no one can remember anything except a strange-looking cake that was at the party that Logan filled up on.

As Logan and Mindy sit in their new bedroom wearing the strangest PJ’s you can imagine, they watch their next door neighbor, who’s celebrating his twentieth birthday and thinks this must be some kind of practical joke, be transported into the body of the mechanical spider and led away. Not only that but Sami, Mindy’s best friend, has for some reason sided with the neighborhood bully who’s holding something over her head and is about to make a huge mistake by trusting the wrong people.

In order to find their missing parents and get out of this world, Mindy and Logan will find themselves trapped in a computer where they will do everything from playing a game of war with those little plastic soldier figurines to walking through a place of ‘Deep Shadows’ where there’s a man attempting to help them on their quest and a group of dark spirits who are led by one - Torrent - who is searching for a powerful staff that will allow him to become the lord and master of all he surveys.

This is an adventure to end all adventures and it’s truly exciting to not only be offered a plot that’s faster than Indiana Jones and more fun than any video game on the planet - but also to have a book in hand that doesn’t rely on any vampire, werewolf, or the undead to engage the reader. The author has done a magnificent job of writing a book that is full of real action and adventure.

Quill Says: Put the joystick, laptop - heck, even the Smartphone - down and read this book! You’re guaranteed to have the time of your life!