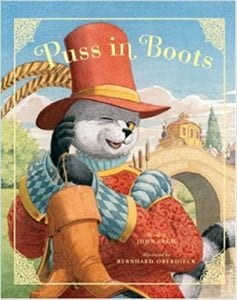 The miller’s son sat under a large tree and stared pensively down at a black and white cat, his only inheritance from his poor father. A frumpy old cat wasn’t worth anything and the young man said to him, “I don’t have a penny to my name, and no one would buy you at the market.” The strange talking cat didn’t argue with that, but he did tell his new master that he could “change his fortunes” and things would get better, much better. The cat demanded a few bits of clothing and before you know it, he looked quite dandy in his new boots and a red wide-brimmed hat with striped feathers. It wasn’t long before Puss began showing up at the king’s castle bringing offerings to His Majesty on behalf of his “master,” Lord Fortunato.

If Puss had sleeves, there would have been an ace up them. He continued to bring some very scarce and special gifts to the king. Things like “singing birds, strawberries, oysters, tender potatoes, crusty loaves of fresh bread, and tarts” came compliments of the miller’s son…er, Lord Fortunato. The king soon became curious and wanted to meet this generous lord, but the miller’s son was worried that he would be rejected by him because he was dressed in rags. Puss had a plan, but would he be able to boost the fortunes of this poor man? Would the king really believe this rag tag miller’s son was actually royalty?

This magical retold tale will delight both young and old as they once again meet the miller’s son and Puss ‘n Boots. I was quite taken by the casual retelling of this old, standard tale. It was very engaging and will not disappoint the reader who wants a fresh take on an old tale to read to their children. The illustrations in this book capture the essence of the fairy tale quality of this twice told tale perfectly with its nostalgic detail and subtle palette.

Quill says: This is one of several in the Classic Fairy Tale Collection you might want to consider adding to your collection!