Puppa-na-Wuppana: The Beagle with the Magical Nose 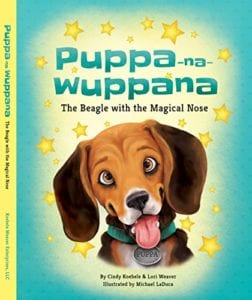 Puppa-na-Wuppana: The Beagle with the Magical Nose

Who can resist the adorable, happy face of a beagle puppy? Puppa-na-Wuppana is a puppy that always gets into trouble but is still loved by his family. His antics will have young children wanting to read his tale again and again.

The story opens with Puppa-na-Wuppana introducing himself to readers and explaining that he has a magical nose. His nose helps him find many things, which is good, but it can also get him into trouble. Next the little beagle introduces his human family, his "mom" and two human brothers. He tells of how he was adopted by them when he was a very little puppy and the fun that they have. Puppa-na-Wuppana also tells his readers about his best friend, the family cat Keekers, and how they love to play together.

Told in the first person by the beagle, Puppa-na-Wuppana is not a typical story with a beginning, middle and end, but rather a series of events that the puppy has experienced (being adopted, teething, playing with the cat). The star of this book is definitely the amazing illustrations that bring Puppa-na-Wuppana to life. Children will absolutely love this little beagle puppy and surely look forward to many future adventures. A minor issue was that numerous words were printed in bold and it's not apparent why, but again, that is a small point.

Quill says: Puppa-na-Wuppana is the sweet story about an irresistible puppy that young readers are sure to love.