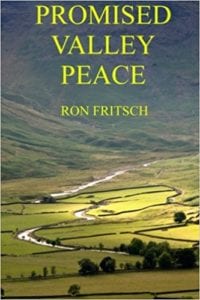 Ron Fritsch brings the epic legacy of the hill and valley people to a close in his fourth and final novel of the 'Promised Valley' series, Promised Valley Peace.

The story begins with Blue Sky, hostage of the hill people and Wandering Star, teller and lover of Blue Sky, strategizing as to how they would ultimately achieve peace among the hill and valley peoples of the Promised Valley civilization. However, their coveted peace would come at a price of more bloodshed and loss. In his teller role, Wandering Star sets out to communicate the plan with their upper valley allies. Soon thereafter, a rigorous training had begun among the people—a training that would prepare the hill people for the final showdown of peace between the hill and valley communities.

Perhaps War Cloud, chieftain of the hill people, was receptive to a peace as well, but his misguided motivations deliver a different set of circumstances. In War Cloud’s mind, peace would serve up his dish of ruling the entire Promised Valley civilization. Even though there had been a pause in the war, the notion was no more than the proverbial quiet before the final storm with ultimate peace resting well on the other side of it. In an unforeseen and untimely turn of events, Rose Leaf, Blue Sky’s sister, has been impregnated by Morning Sun. She becomes the regent ruler of the hill people; a situation that sparks War Cloud’s mission to accelerate his mission to overtake and conquer Promised Valley forever more. What War Cloud didn’t anticipate, however, was the price he would have to pay in order to arrive at the end result he originally envisioned—an unanticipated result that would change the outcome and the future of the Promised Valley forever.

Once again (and thankfully), there is a spoiler alert in the back of this novel. After reading Promised Valley Conspiracy, I approached this fourth and final novel with a stronger sense of the players and their respective roles in the continuation of the legacy—thanks, in part, to the character list at book’s end. I found I was able to get up to speed much quicker with the story line given the refresher of the characters.

Upon finishing Promised Valley Peace, my take away from this body of work is a strong sense of having experienced an incredibly interesting epic tale of “what if” had the beginnings of time played out as Mr. Fritsch had so adeptly written across the pages of his series. I applaud him for not only staying true to his audience, but for maintaining the patience and wherewithal to feed the story to his audience in palatable, bite-sized pieces. If I had to render one criticism, it would be to ask Mr. Fritsch to slow down and temper the beginning a bit further. In Promised Valley Peace, I found myself struggling a bit in the early pages to sort out the characters and their respective roles. Perhaps this was intentional on Mr. Fritsch’s part to create a sense of urgency and intrigue while encouraging the reader to hang in there because all would make sense at the turn of the next page. His signature style of writing several subplots, twists and turns in the early pages delivers an intrinsic feeling of being at the starting line of a champion race that is about to begin. Indeed, Mr. Fritsch has accomplished fantastic closure to his epic series in book four, Promised Valley Peace.

Quill says: The answer to the question of peace is delivered and then some in Promised Valley Peace. Book four stays true to the author’s intent in that it is genuinely thought-provoking with an epic ending that complements this intriguing civilization of people.