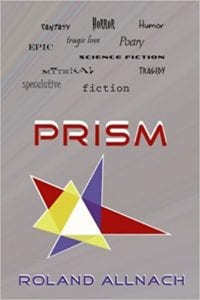 When you think of the word 'prism' you think of glass; that triangular shape with refracting surfaces at acute angles that separate white light into a spectrum of colors. It is not an overstatement to say that this author, with this collection of the best of his short stories along with his newest creations, is most definitely that 'spark' of pages that shoots a spectrum of colors through the mind and imagination.

There are too many to delve into for a review, so selecting some of the most extraordinary (which was difficult, considering the writing never fails to entertain), is what to do in order to attempt to frame the pictures that Allnach has created.

In the very beginning the reader opens to the world of a soldier; a soldier who is in thought, considering he's all that's left of what everyone assumed would be a triumphant army. The promise of this battle to the people had been that it would be swift - with the golden armored soldiers making sure to defeat a smaller, less-armed, less-experienced culture that was basically fighting with passion. There are morals here galore, with the foundation telling that money and nobility do not equal success when put up against a man who lives and dies for his beliefs. Readers watch the solider deal with his survival, deal with his own valor, and stay loyal to his oath to protect a city that he can no longer defend. Among him his madness, savages, and a woman who needs that soldier's protection no matter what the cost. The tale is "After the Empire," and the plot is vivid, dramatic, and extremely enticing.

A young boy sits in the classroom, like most, bored with the reality of school. Engaging his imagination the boy becomes "The Great Hunter," heading into a world through his drawings and mind, where predators must be slayed...and perhaps where new prey can be found back in reality.

Bone-chilling fear makes the reader want to hide under their own bed in "Creep." William, the grad student who has found a once-in-a-lifetime discovery and rushes to share the news with his Professor in "Apogee," learns the valuable lesson that when something comes once, perhaps it is the most loved and most supportive person in your life who should head the news...making one of those moments that rarely happen during a lifetime. The 5-Acts of "Titalis" take the reader's breath away, as a journey to a place of lost glory is taken, where minds and souls work and play.

On and on this collection goes, with tales for literally everyone's tastes. Each genre is spoken for - from the technicolor world of sci-fi to humor to horror to fantasy, and beyond. Allnach has a voice that speaks so loud readers lose themselves in the stories, making this a whole lot of fun!

Quill says: Just like a prism, this is a dazzling collection.

For more information on Prism, please visit the author's website at: www.rolandallnach.com