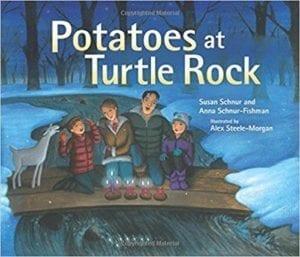 It's the sixth night of Hanukkah and Annie, along with her brother, parents, Ubi the goat and Richie the chicken are going to celebrate by going on a journey in the woods. Together they'll make four stops and learn important things about each other, and Hanukkah, along the way.

Annie's family has a tradition of celebrating Hanukkah in the woods if it is snowing and tonight "...it's really snowing!" So off into the woods they go. Annie has been put in charge of making the plans for the family's trip into the woods and she has carefully thought out the adventure. She has a sled with a box of secret packages to help her family celebrate the night, and everybody wants to know what she has. Annie explains that there will be four stops - at Old Log, Squeezy Cave, Billy Goat's Bridge and Turtle Rock.

The first stop is Old Log and as everybody sits down on the log, Annie opens her box of secrets and pulls out a package. She asks her family how Great-Grandpop kept warm as he walked to school in the cold. Mom, Dad, and brother Lincoln all guess but nobody gets the correct answer. When Annie pulls out hot potatoes and explains how Great-Grandpop put them in his pockets to keep warm, everybody laughs. Little do they know the potatoes will re-appear at another stop to help teach the lessons of Hanukkah.

Potatoes at Turtle Rock is a companion to the author's first book, Tashlich at Turtle Rock, in which Annie and her family learn about the Tashlich ceremony. It might be helpful to read that book first as you'll then know the characters. Potatoes at Turtle Rock opens with Lincoln (the brother) asking, "Hey, can Ubi come?" and I admit to being lost, trying to learn who Ubi was and where the family was going. I initially thought that the first few pages of the book were missing. Once past that, however, the story settled down and told a nice tale about a loving family and their traditions.

Quill says: A nice story to help teach the importance of traditions in the celebration of Hanukkah.