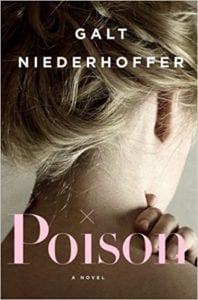 Galt Niederhoffer delivers a roller coaster ride of deceit, betrayal and so much more in his latest novel, Poison.

Cass and Ryan Connor have it all: three kids, a cat, and a yard in the beautiful seaside community of Cumberland, Maine; just outside of Portland. Life is cozy and complete. Recent transplants from the bump and grind of the city, they buy the ultimate Victorian ‘fixer-upper,’ enroll their kids in excellent schools and off to work they go each day to their equally satisfying jobs. Nothing could possibly go wrong in their familial utopia...until it does.

Of course, sacrifices had to be made. Ryan landed the dream job in the architectural firm which Cass knew would mean long nights and a lot of hard work and devotion on Ryan’s part. However, when long nights became the norm and Cass was increasingly becoming a single mom with her absentee husband, she began to question just what so many ‘long nights’ actually entailed. It started with the persistent buzzing of texts coming from her phone. As much as Cass tried to ignore the sound, she would succumb to what she already knew: ‘stuck at work’ ...again. No worries. Three kids later and nearing forty, Cass could still rock a party dress and hang with men half her age.

Ryan was her second chance at happiness after her first husband died. Ryan was the one to court this single mom with two children only to sweep her off her feet into happily ever after. He was relentless in his pursuit. Cass knows he’s the one when he accepts her children Pete and Alice as though they were his own and finds herself saying ‘I do’ once again. Time marches on. The family bonds. Cass and Ryan welcome their new bundle of joy they created together, and the Connor household travels further down the road of bliss. Fast forward and late nights multiply to most every night, complemented by out-of-town trips on a more regular basis. These circumstances are compounded by health issues that hit Cass like a freight train overnight. Suddenly, there’s more to this shift in what was once the storybook life. What is Ryan up to and why does Cass feel like she is witnessing the implosion of her life from afar?

Galt Niederhoffer’s crafting of this story is like building a precise masterpiece out of LEGOs one delicious scene after another. The twists and turns he strategically plants throughout this read are superb. He is a slave to his audience in that he listens to their demands and acquiesces by spinning a fantastic plot of mystery, betrayal, deceit and the age-old question of why. He goads his audience with the challenge of figuring out the moment when love turns to betrayal. All the while, he supports the wonder by planting seeds of doubt as the plot thickens. Is character Ryan justified in doing what he does? What about character Cass? Is she the victim (or were the signs all there and she chose to ignore them)? Niederhoffer has a wonderful command of his pen in this story. He taunts his reader with just enough to lead them to the very edge of the cliff before he pulls them back in the next scene. I thoroughly enjoyed the masterful writing throughout. There is not one moment of drag in this read and I welcome the opportunity to read Mr. Niederhoffer’s next book. Well done!

Quill says: Poison is the quintessential example of presenting the question: ‘Do we ever really know everything about the one we love… and when it comes down to it, would we want to’?