People I’ve Known and Been: Little by Little 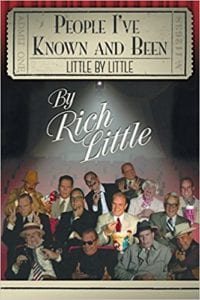 People I've Known and Been: Little by Little

Rich Little, the undisputed King of impersonators, has finally written his memoir, and it is chock full of fantastic stories of so many of the celebrities he has known through the years.

Little begins his memoir with his early years, growing up in Ottawa, Canada during the 50s. The second of three children, he and his two brothers had a happy childhood, frequently spending weekends going to the movies. The brothers would return home and role-play the various characters in the movies they'd just seen, and soon Rich was doing impersonations of those characters. Eventually, he and his best friend put together an act that they'd perform at local establishments. The act proved successful, but eventually Little's partner lost interest as his focus turned to journalism. Rich kept plugging away until his big break came - an appearance on "The Judy Garland Show."

Little's big break almost didn't happen, as he was scheduled to appear at a sheep-shearing contest (yes, really). But thankfully, he managed to get out of that engagement, and as they say in Hollywood, a star was born that day. The reader is treated to the behind-the-scenes events that took place leading up to, and during, the taping of "The Judy Garland Show" and it's a real treat to read. For those curious, you can also view the performance on YouTube.

Rather than a simple chronological memoir, Little has told his story via chapters devoted to various celebrities he's had the pleasure of knowing and working with through the years. Actors from George Burns to Carol Channing and John Wayne fill the chapters, as do politicians from Hubert Humphrey to George H.W. Bush. The stories Little tells are priceless, and I particularly enjoyed learning what these stars of yesteryear were really like. Jack Benny and his search for his favorite NBC Chicken Soup was hysterical, as too were the many stories of other movie stars. Coming out of an AFI dinner, Little recounts how Jimmy Stewart kept fumbling his license plate number every time he tried to tell the parking attendant the number. In desperation, Stewart's wife whispered the number into Little's ear, who then, in Stewart's voice, told the attendant the number. The attendant said "Thank you. Both of you," and ran off to get the car.

I can still vividly remember back in the 70's when our entire family would gather around the television to watch "The Rich Little Show." We never missed it and did our best to watch other shows, and movies, that Little did. His records, too, found their way into our house (I still have them) and there's a reason - Little kept us laughing.People I've Known and Been is a book that will have you laughing, and it's not to be missed for fans of both Rich Little as well as those who want an inside look into the lives of so many of our favorite movie stars. There are a treasure trove of stories in this book to get lost in, laugh along with, and reminisce about the good 'ol days. Throughout the book, Little underplays his great talent at impersonation, but those of us familiar with his career know what a talented man he is. At the back of the book is a two-page "Memories" outline that has snippets of various personalities and what they were like ("Shirley MacLaine, a bright and interesting lady. Sometimes a little off the wall, but that's what I like about her"), an epilogue that gives a further glimpse into Little's personal life, an Afterword, and a Post Script on "Can Anyone Be an Impersonator?"

Quill says: People I've Known and Been: Little by Little is a true treasure for fans of Rich Little as well as those who love classic movies and even fans of more contemporary personalities from Dr. Phil to Barack Obama.