Peace and Plenty: Finding your Path to Financial Serenity 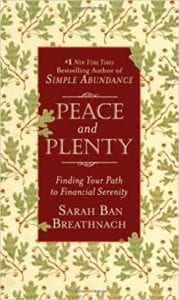 Peace and Plenty: Finding your Path to Financial Serenity

Sarah has been a “rock” for millions of women around the world since she first put her words of wisdom to the page in Simple Abundance. Her words, for many of us, went far beyond the somewhat simplistic self-help books of the day and her name became almost synonymous with that of the word "comfort." One day, as she claims, she was a “freelance writer without a comma in [her] checking account and the next [she] was a millionaire.” (pg. 20) Today all that money is gone and she feels hesitant to step forward to advise other women, as she claims about “their lives when I’ve messed mine up so completely.” Perhaps, but many who are undergoing their own financial woes want to hear from someone who is experiencing their pain.

Sarah throws some of the blame on that Englishman she married, but frankly she does admit to being a L-O-U-S-Y money manager. One mistake after another and she practically found herself living on the streets and would have, had it not been for her sister lending her a desk to write this book. She, like many women who have had commas removed from their checking accounts, bluntly states, “this starting over from scratch is beginning to wear on my nerves.” (pg. 68) In this money-memoir Sarah takes a step back, examines the monetary lives of relatives such as Lucy Lyttle Donelly White, her Kentucky grandmother, other relatives, and her own in a desire to find out where she went wrong.

In Sarah’s familiar conversational essays you will find snippets of advice, which she is now following, from money wise women of the past and, most importantly offers a mantra to hold to your heart: “Keep calm and carry on.” She reflects the pain many women feel when she ponders, “If you are a woman who has prudently planned and carefully saved for your retirement and your children’s education, to suddenly lose what you thought was safe is devastating, because you lost more than money, you lost your dreams.” (pg. 83) Her comforting words of wisdom, gleaned from the world of hard knocks, will make you want to begin to believe in yourself, to pick up and carry on and move forward … with her, Sarah Ban Breathnach.

I’m sure this was a difficult book for Sarah to write as she has to admit being beaten down financially. It was as if she felt quite pained to admit in the later part of the book that, “I’ve spent the last year in my pajamas writing this book in the corner of my sister’s living room.” (pg. 295) This startling admission is, in my opinion, a very courageous one, yet a labor of love for her readers who have followed her for so many years. It was a book that I savored, reading bits of it every night to glean her words of wisdom on how we all can pull ourselves up by our bootstraps and continue on in spite of adversity. Sara says, “So hold on tight to your dreams—they are yours to keep.” And so they are. This beautifully written book will make you dream again and help you to put your hopes and dreams into action for a better financial future.

Quill says: This amazing “money-memoir” is a comforting, positive book that will help women everywhere “keep calm and carry on.”