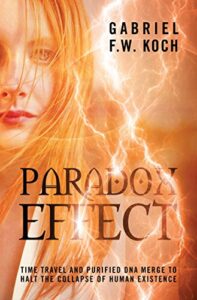 The world is coming to an end and mankind has been on the pathway to impending doom set in motion many centuries ago. Can the past be changed to save the future? Let’s find out in Paradox Effect by Gabriel F.W. Koch.

The year was 1954 and Navy Intelligence agent Peter Hersh met and fell in love with Dannia Weston, a highly educated woman working on a classified project for the US government. Their romantic relationship developed and they eventually started having discussions about marriage. Soon after, Dannia began having severe headaches that knocked her unconscious. These headaches were also accompanied by visual and auditory hallucinations that made her question her own sanity. The hallucinations began as dreams about unfamiliar people in an equally unfamiliar environment talking about things that she could not comprehend. Subsequently, Dannia found out that she was pregnant and, as her pregnancy progressed, the hallucinations developed into daytime visions. To make matters worse, a man kept on chasing after them, claiming to need to take Dannia into custody for interrogation purposes about her activities in the recent war. With the pregnancy, the visions, and the man on their tail, Dannia’s desire to just marry Peter and live a quiet life did not seem feasible at all.

Three hundred years later, in 2254, General Patrick Buckwalder sent agent 476 into the past on a mission to prevent a chain of events that had resulted in the end of the world. There were neural nets inside 476’s brain theoretically in place not only to block off her memories but also to reduce the desire for copulation and therefore minimize the likelihood of pregnancy. Given that 476 now appeared to be experiencing memory rebirth, General Buckwalder sent another agent to monitor her. Things became more complicated when they found out about 476’s pregnancy and, with this unprecedented situation that could potentially make or break the world quite literally, Buckwalder was faced with a dilemma that would test his moral compass. It all hit the proverbial fan when Buckwalder lost track of both his agents. With two time travel agents having gone rogue and a baby in the womb carrying DNA from both past and future, the fragile stability of the past, present, and future teeters on the precipice.

Paradox Effect by Gabriel F.W. Koch is a plot-driven science fiction novel that deals with time travel, the intricacies and challenges, and the potentially far-reaching and possibly catastrophic consequences of actions done by time travelers. This is a “what you do in the past can affect the future” kind of time travel story and it was interesting to see how psychology and moral issues came into play with such a high-stakes state of affairs - a mission to save (or destroy) the world. The pacing of the story was done well and the alternating perspectives of the characters in the past and those in the future helped sustain the pace. This was written with an omniscient narrator point of view and characters’ motivations and thoughts were shown through streams of consciousness. Having said that, the reactions and motivations of the major characters were realistic and grounded albeit frustratingly idealistic considering the grave situations they were all in. There is also romance in there which, fortunately, only existed in the background and did not take the focus away from the actual important events.

Quill says: Paradox Effect is an easy to read time travel story about a woman tasked to save the world and her subsequent falling in love which could literally ruin it all.