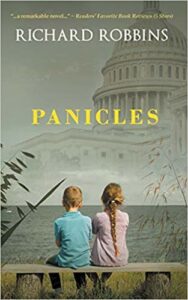 What does it take to attain high office? And is it worth it? And are the people behind the scenes as influential as the ones who stand before the crowd? And, most importantly, is success in professional and public life worth the sacrifice of familial peace and security? By comparing two very different families, author Robbins ponders these time-honored questions in his latest novel.

The Wax family – Paul, his wife Jamie and their two sons Alex and Matthew – are smart, plain-living people who sprang from humble roots. The Murnanes – Emerson and Elizabeth and their children Robert and Jonathan – are bluebloods, so steeped in money and privilege that they take it for granted. The two families meet at a poolside, where Matthew takes a shine to Emily, Robert’s daughter, while Emily takes a shine to a new puppy belonging to Dodah, Paul’s surrogate mom, and the older Murnanes learn about some of the simple pleasures of the local scene from Paul and Jamie. From that time onward, there are further encounters as the children grow up. Among their parents and grandparents are stirrings of far-reaching consequence as Emerson persuades Robert to run for high office, Alex and Matthew learn they have a surprising benefactor, and Matthew and Emily continue their friendship with small favors along the way to sweeten the relationship. Political machinations, substance abuse, crime and deep-seated jealousies all will play a role as the story moves toward an unexpected climax.

Robbins handles these wide-ranging plot shifts deftly. His book’s title references a plant with multiple branches and on each branch, multiple flowers, an apt symbol for the intertwining of this generational saga. Too, each character is multi-dimensional: Emily is sweet-natured and stronger than she knows, but plagued by a family propensity to alcoholism; Matthew, blessed with sudden wealth, chooses to use his skills in a giving profession; Dodah lives like a proud pauper while managing a secret fortune. Putting all these branches on one tree seems impossible, but by the end of Robbins’s skillful planning, it will come about. There is much to be admired in his writing style, especially the credible views of the more challenging way of life experienced by the Waxes contrasted with the frills enjoyed by the Murnanes. Luckily, as Robbins depicts them, among both clans there is a willingness to accept and understand the other. The strands of relationship and possibilities for further meshing suggest that a sequel could be forthcoming.

Quill says: Richard Robbins has constructed a dynamic, dramatic story of two families entangled in the same lines of destiny. This cross-generational tale grows and branches out until finally, after sunlight and storm, it will come to full bloom.

For more information on Panicles, please visit the author's website at: www.Robbinsbooks.com