Paintings From the Cave 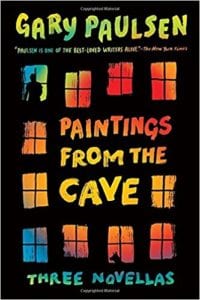 Paintings From the Cave

Gary Paulsen has always been a favorite writer of middle-grade fiction. This is the man who owns a sense of humor that is truly wonderful, and who brings his readers fun and insight with every single title he pens. But this…this new book from the master…is a wonderfully emotional and stunning work that will leave readers breathless.

Paulsen has spoken about his own upbringing as being extremely difficult - until his art and his dogs saved his life and brought him into a wonderful future. He meets and talks with children all the time across the country, and recently he was speaking about his books when one child stood up and asked Paulsen what exactly could be done when life got to be that bad. The subject of fear and unstable environments - to say the least - certainly came up. And the knowledge that there are so many out there who are hoping that one day they will find their art and their dogs in order to save their lives before it’s too late, was enough to break anyone’s heart. What Paulsen went on to do was create this incredible book. A book of three separate stories that look at ‘real life,’ and what too many kids truly have to go through on a daily basis. Each one is a masterpiece in its own right.

The first focuses on a young man named Jake. Jake is a good kid who lives in a horrific neighborhood. He knows that if he stops moving, they’ll get him. Simply put, the gangs are there; they watch and wait until they can get Jake into their group. So Jake stays on the move; he hides in the basement of his building at times while the bad guys are out in front on the stoop, and he spends time with his best friend, Layla. Layla has a life just as bad as Jake’s. And on top of that, the poor girl is fifteen and is going to have a baby.

Jake sees a sculptor living in an apartment building across the street - the street that is going through the urban renewal process. The sculptor befriends Jake, offers him food and a peaceful place to stay, but Jake has to live his life on the move - trying his best not to get caught. Readers will be blown away by how this story ends.

The second tale wraps around Jo-Jo and the issues of drinking, molestation, and the reality of having to live in a nightmare. Jo-Jo has one family she relies on and that is her dog family; these are the creatures she can trust with her very life. One day she meets a young girl named Rose. Rose has her own issues, but the friendship that is formed and the wealth of emotions that appear on paper make this a truly unforgettable tale.

The third and final story speaks of two young men who are basically on their own. Erik is Jamie’s older brother - and his hero. After all, Erik was the one who saved them both from certain death. Finding their place in the world is amazing to watch. This is, as are the other two before it, a tale of pure emotion, respect, honor, love, and strength; tales of finding the ability to survive in a world of chaos, pain and fear. There is nothing to say, here. Readers already know Gary Paulsen is an amazing author; now they know he is one of the most amazingly inspirational human beings on the planet.

Quill Says: This is a book that should be up for any, every, and all awards that the literary world can possibly give!