P is for Pirate: A Pirate Alphabet 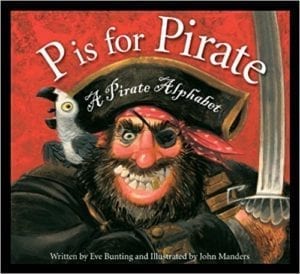 P is for Pirate: A Pirate Alphabet

Ahoy, matey! There are all kinds of pirates, including Cap’n Crunch, but if you want to really know pirates from A to Z, this book has everything you’ll need. Of course every good pirate needs a cutlass to round out his outfit. “C is for Cutlass (and other weapons) / A cutlass, pistol, grappling hook, / a sharp and wicked knife. / These are all a pirate needs / to lead a pirate life.” If you’re wondering whether or not the good old Cap’n on the cereal box knows a captain whose last name starts with a K, it’s rather unlikely. Captain William Kidd was someone who began his life of crime on the high seas in the 1600s.

If you think all pirates were men, think again. There was one little gal who could plunder the high seas with the best of them. “Q is for Queen of the Pirates, Grace O’Malley / she was the Queen of Pirates, / as brave as anyone. / she could wield a cutlass, / She could shoot a gun.” Yep, she was quite an unusual gal in her time! Yo-ho-ho, did you know that “X is for X Marks the Spot?” There are lots of pirate treasures in the book and you can watch a few of them as they bury that loot on the beach. There are all kinds of pirates in literature and in the movies. Do you have a favorite? Wait, do I see Black Bart under B?

This is a fun, fabulous alphabet book about everything “pirate.” Eve Bunting has just the right formula to make youngsters want to learn all about them through her impeccable verse. I probably learned a few things myself in the process. Each verse is accompanied by a sidebar with a “real” historical vignette about each lettered item. For example when we check out “J is for the Jolly Roger,” we learn all about its meaning and possible origin of the name. The artwork pops and has great kid appeal with its humorous overtones. P is for Pirate is the perfect addition to the shelves of anyone interested in pirates and life on the high seas!

Quill says: Any youngster who has taken a fancy to pirates and their life of crime on the high seas will love this book!