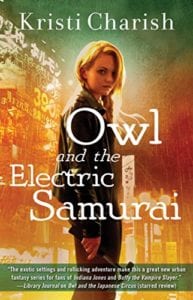 After surviving an uprising of the dead in Los Angeles orchestrated by some power hungry humans and supernaturals, Alix Hiboux, better known as the Owl, realizes that this is just the start of something much larger within the supernatural world. Her boyfriend Rynn, a supernatural being himself, is always saying that the balance of power in his world is quite complex for if any one species decides to attack another an immense amount of devastation will be the result for both the supernaturals and humans.

In this story, book 3 of The Owl series, the plot becomes even more tangled when Alix’s boss Mr. Kurosawa asks that her next job be to retrieve something the elves have specifically asked for. Now, this was something completely out of the ordinary, for Alix was used to doing jobs for Mr. Kurosawa himself instead of a third party hiring her through him. It was especially strange that the elves asked to hire her. It has never been a question how Rynn felt about working for the elves as he himself had worked for them before and found that even though they seem sincere on the surface their true intentions are extremely selfish and they do not mind putting others in danger to get what they want.

However, it becomes clear that Alix has no choice but to try and find the artifact the elves want even though Rynn tries to persuade Mr. Kurosawa to reconsider. In order to find a place to start their search Alix is given a small folder with descriptions of the artifact the elves want retrieved and all the documents describe it as armor used for battle. The strainge thing, however, is that all the descriptions and pictures of the armor are slightly different. The one symbol that is consistent in all of the pictures is a lightning bolt that is carved on some part of the armor, giving it the name “lightning armor” in many of the notes left with the pictures. Suddenly, Alix realizes that this suite of armor had not been physically altered over time but that the armor itself changes to suit the specific person wearing it. All at once, this artifact becomes immensely important for what could the elves possibly want with something this powerful that hasn’t been seen in hundreds of years? There is most likely a good reason for the armor's disappearance all those years ago and Alix is sure that whoever wore this armor last found out just how dangerous it was and worked to keep it hidden forever.

This third installment of The Owl Series had me hooked on every single page and did not disappoint on delivering another amazing and exciting adventure. This is a book that takes me to another world entirely with the amazing descriptions of the exotic locations and the unforgettable characters both human and supernatural come out amazingly in every chapter. This is a book that I can start reading and then suddenly time has flown and I didn't realize I had been reading for so long. Owl and the Electric Samurai is simply a book that is a whole lot of fun to read.

Quill says: Another incredible installment that had me on the edge of my seat loving every minute of it.