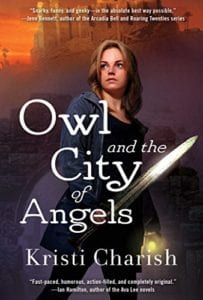 Stealing authentic artifacts was something former archeology student Alix Hiboux did not exactly see herself doing as a career but things have a way of changing. Now she is known by the name "Owl" and is considered one of the best for this particular skill. However, everyone around her would admit that her methods are often times unorthodox, risky, and quite dangerous. This is why Alix chose not to tell anyone about her current plan to locate and steal two artifacts on the same trip for it would produce double the rewards but be twice as risky.

Unfortunately, while looking for these two artifacts, Alix is found by a group of International Archeology Association agents (IAA agents). Alix is not on good terms with this group because they do not appreciate thieves coming to steal artifacts from under them. Barely escaping from the IAA, Alix cannot help but wonder why in the world they were after her with such force, for yes she has stolen artifacts for clients but there are many bigger problems that the IAA should be preoccupied with. After returning to Las Vegas to face her boss, Mr. Kurosawa, who is secretly a dragon hidden under his human form, she is told the reason for the IAA’s keen interest in her. There have been several cursed artifacts stolen from a place called the City of the Dead, which is a terrible idea for ancient curses are extremely powerful, but the worst part is that the thief has been identified as the Owl.

Suddenly, the realization hits Alix that the IAA was hunting the person pretending to be her because whoever he/she was they had stolen cursed artifacts under her name. Now, she is on the top of the IAA’s list and Mr. Kurosawa is debating whether to keep Alix or fire her. He decides her next job will be to first steal the cursed artifacts that have been taken from the City of Dead and bring them to him and next to find the person responsible for impersonating her. The catch is that these artifacts cannot be handled by humans for they will instantly be cursed by whatever evil lays within them and these curses lead to death for the host. So, with no other choice, Alix heads off to find these artifacts knowing that they will probably be difficult to locate, and they will curse her if she touches them. Also, her boss will most likely kill her if she does not complete this job successfully. With her vampire attacking cat Captain along for the ride, Alix locates the artifacts but the web of deception surrounding them is connected to something much more terrible than anything Alix has encountered before.

There was not a page in this book that wasn’t filled with suspense, adventure, and action which made for a great read. The character of Alix is a wonderful mix of cockiness, stubbornness, but also ambition that creates an unforgettable personality. Even though the language is definitely geared toward an adult audience, the storyline is compelling and fun to read, causing me to flip pages as fast as I could. I have the next book ready to start and I can’t wait to begin reading the next installment.

Quill says: A series with an unforgettable character who brings the action to life.