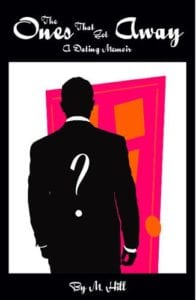 As the title suggests, this book is a dating memoir. M. Hill tells us, in minute detail, about pretty much every date she has been on over the course of thirty years. At first I wondered what would make the author think that someone would be interested in this level of detail about what were mostly brief and forgettable encounters. It turned out, however, that pretty soon I began finding it hard to put the book down.

Though Hill's tone is conversational, and sometimes rambling, every statement included is in fact necessary to understanding the story. What was so fascinating about these detailed accounts of failed relationships? It was the startling similarity between Hill's encounters and my own life. The school she described was so like mine that I wondered for a moment whether it couldn't be the same school. More often than not the men she dated were so like people I knew that I didn't have to use my imagination at all to picture them.

Could it be an amazing coincidence that my life has been so similar to Ms. Hill's? I will say that I am her age and grew up in New York. There may be something to that. Still, when I look at the events of Hill's life, our families, education, and employment history are very different. I think that perhaps the main thing we have in common is our similar dating experiences. Remembering conversations I have had with friends over the years, I am pretty sure there is something universal in The Ones that Got Away. Someone who married her high-school sweetheart might not be able to identify with Hill, but I think that most women who have been out on a few dates will find something familiar here.

Ms. Hill never offers us a thesis, a purpose for telling us this story, and in the absence of an explanation from her, I found myself asking, “What does it all mean?” The book is a lengthy rumination on failed relationships. As such, it would make a good read for someone going through a break-up or a long period of being single. If dating is as Hill describes-- and I think many of us will be forced to admit that it is-- then the reader can convince herself that she is better off single. Hill herself says that she does not believe in soul mates and that she identifies with Mary Richards from The Mary Tyler Moore Show, “a single girl who worked, supported herself, and came home to her apartment.” Nonetheless it is clear that Ms. Hill has devoted quite a lot of energy over the years to finding a man and then to the relationships she has had with men.

Taken alone any chapter of this book would be a funny little vignette. And Hill is very funny. Her style is sometimes like a stand-up comedian. I laughed out loud several times. What caught me by surprise, though, was that the sum total of these stories was more than a good laugh. Ms. Hill includes a lot of small details about her relationships with men-- what she was wearing, where they went to dinner, what they ate, what they talked about. She conspicuously leaves out almost everything else that happens in her life. Reading between the lines, I began to understand that Hill has a wonderfully supportive family who seem only to want the best for her. In addition, she appears to have good friends and to be successful in her job. Though Ms. Hill's tone initially struck me as sarcastic and negative, I came to like her, and to join with her family and friends in wishing her the best. I also wished that someone would come along who appreciated her intelligence and generosity and treated her the way she deserved.

Hill is very honest about her mistakes, and though it is easy for the reader in many cases to see what she should have done in a situation, it was also incredibly easy for me to understand why she acted as she did, and, most importantly, it was easy to forgive her. So without ever expecting to, I found myself liking and rooting for this person whose life reminded me of my own. Ms. Hill helped me forgive my own past mistakes, and that was the last thing I expected to get out of this book.

Without making many overt attempts at offering wisdom or encouragement, save for the last few pages, M. Hill gives us an opportunity to see ourselves a little more clearly. In the very personal details of her own life, Hill says something universal-- at least for women who date men. I would not necessarily recommend the book to a man. If, however, there is a man who has always wondered what women talk about when they are alone, he can find out right here. Hill's tone throughout is that of one girlfriend to another, and the subject matter like many cozy conversations I have had among women.

Quill says: Sometimes hilarious and always a little too familiar for any woman who has ever dated a man.

For more information on The Ones that Got Away, please visit the publisher's website at: Honey Bee Publishing.