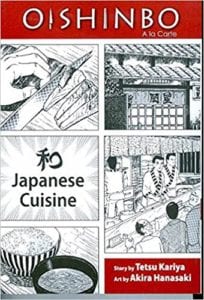 The story begins when one of Japan’s leading newspaper editor's comes up with a great gimmick to build readership. He assigns his top journalist, Yamaoka Shiro, to visit a series of Japanese chefs in order to find the holy grail carte du jour, a.k.a. the "ultimate menu." Early on it is revealed that Yamaoka Shiro is not just any journalist, he is the son of the infamous director of The Gourmet Club, Kaibara Yuzan. The story becomes more layered when we learn that Yamaoka Shiro and his father have a long standing fiery rivalry that complicates the outcome of this venture. Along the way we meet Shiro’s cohorts, and a series of chefs who explain everything from the secret of making a good dashi (a broth that is the basis for many Japanese dishes), to the careful crafting of chopsticks.

The chapters are divided by course, and each section tells a fascinating story. We learn why a good chef does not smoke cigarettes, how to correctly brew tea, why a simple sushi recipe takes substantial talent to prepare, and that the main ingredient in a tea ceremony is humility.

Though the book does not furnish as many recipes as I would have hoped, it fully conveys the unique qualities of Japanese fare; simultaneously taking on the universal conflicts that impact family relationships. This compelling story details the art of Japanese cooking using a clever format that makes one want to, if not try and create the recipes themselves, at least savor some of these delicacies at a nearby restaurant.

Quill say: Explore the world of Japanese cuisine and culture, with a side dish of family conflict.