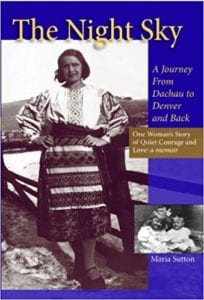 Maria's mother was always secretive about her past, seldom giving more than a snippet of information. Everything was so long ago and her secrets and lies were hers and hers alone, not to be shared with anyone, especially Maria. Julia and Povilas (Paul) Venckus and their two daughters, Maria and Krystyna, were a displaced family who immigrated to the United States from Germany in 1951 to start a new life. Maria was too young to remember the camps and the voyage, but later she was old enough to feel the pain when taunted by other children. "DP's! DP's! Dirty DP's!" It seemed like Colorado had always been her home, but soon the home of her past would insidiously sneak up to haunt her.

Janka Mucha was conversing in hushed tones to Maria's mother Julia as they drove to the Polish Club picnic. Maria had no interest in the old country, but as a young teen knew that whenever the name "Jozef Kurek" was mentioned, it was something not meant for her and Krys to hear. "Cisza, cisza!" Julia wanted Janka to drop the subject, but it was one instance when her daughter would be persistent. Just who was this man? Perhaps Maria's pain could have been dampened if Julia had lied, but when she said, "Jozef Kurek is your father," it began. A decades long search would begin from that moment on. Just who was Jozef and where was he?

Julia, with whom the story began, was "tired of living in [a] snake infested dirt cellar" and decided it was time to leave her own family after the German invasion of Poland. Panic ensued across the countryside, but she was brave and wanted a life for herself. Julia's respite was short lived and she soon returned home to help her mother only to be captured by the Germans. Dachau would be her new home, but Maria's search would find no record of her stay. It was certain, however, that Julia had been sent into forced labor, least ways it seemed to be so. "I fell in love with him instantly ... he looked at me with those crystal clear blue eyes and gave me a warm friendly smile." The sands of time were shifting and Julia was becoming an old woman. Would Julia begin to open up and tell the truth about her life and love or would the story of Jozef be lost forever?

This is the fascinating story of Julia and her daughter Maria's desperate search for lost family. Initially Maria's search focused on an obsessive search for Jozef, the father she idealized in her mind. Her quest, like that of many, should have ended at Ellis Island, an island where dreams began for immigrating families, but ended for those who wanted to return to the "old country" in search of their ancestors. As I traveled through this mother/daughter memoir, there was no sense of urgency nor one of excitement and I didn't expect one.

I was, however, intensely fascinated by Maria's depiction of displaced person's camps and her tenacity as she searched for Jozef and other family members. The latter part of the memoir is an emotional reflection on her forty-three year search, her journey for the truth, a truth that set her free.

Quill says: The Night Sky was an historical memoir that touched my heart and helped me to think about the casualties of war ... the lost families.