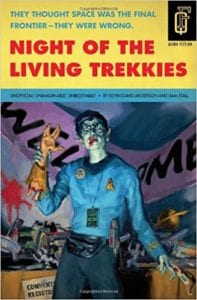 Attention Star Trek fans! If you’re willing to check reality at the door so you can go on an adventure where no man, or zombie, has gone before, then I recommend that you pick up a copy of Night of the Living Trekkies.

Jim Pike (yes, I get the pun and yes, I know it was Christopher Pike in the series) is a war-weary soldier who has returned from two tours of duty in Afghanistan. All he wants is a mundane job in a stress free environment. He finds his ideal job working as a bellhop at the Botany Bay Hotel (yes, another Star Trek reference) in Houston, Texas. All is well until the annual Star Trek convention comes to the hotel. Jim, who knows quite a lot of Star Trek trivia but left “that part of his life” behind him years ago, is not terribly thrilled at the prospect of dealing with nutty fans all weekend. It promises to be a hectic weekend with a hotel full of Trekkies.

It isn’t long before strange things start happening at the hotel. At first, Jim and the others blame it on the hoard of Trekkies. But soon it becomes apparent that something much more sinister is the cause. Jim and a rag-tag band of convention attendees are soon fighting off a relentless band of flesh-eating zombies.

If you’ve never heard of a bat’leth, don’t know of the Kobayashi Maru, have never sat down to a bowl of gagh, and can’t tell the difference between Guinan and the Squire of Gothos, this may not be the book for you. There are a LOT of Star Trek references, which is what made this book so much fun for this diehard fan. Humor was subtle and spread throughout but again, if you don’t understand what’s so funny about a musical group called Seventy-Six Trom-Borgs, then again, you will likely miss most of the humor this book offers.

Published by Quirk Books, the publishers who have brought us popular zombie takes on classics such as Pride and Prejudice and Zombies and Android Karenina, this tale has a slightly different spin. While the others typically insert zombies into classic stories, Night of the Living Trekkies instead brings zombies into the present day, rather than into the world of Kirk, Spock, and the rest of the Enterprise crew. We see a bunch of Trek geeks trying their best to survive. There’ll be no super-heroic deeds by Captain Kirk to save the day.

Night of the Living Trekkies is a fast-paced, well-written journey into the world of Trekkies forced to fight off an ever growing band of zombies. Silly? Yes. But it’s also a lot of fun. And a note to the authors – thanks for the “Trekkies” vs. “Trekker” discussion and especially for using “Trekkie” throughout the book! Yes, I am a Star Trek geek.

Quill says: I loved the mix of zombies and Trekkies in this book and knew every Star Trek reference, every little subtle dialogue tribute, and even passed the three question super-geek quiz. Will you?